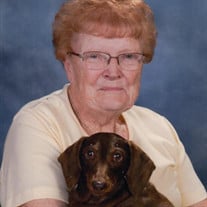 PORT SANILAC- Agnes Camps, age 94, a resident of Port Sanilac, passed away at her home on Wednesday, May 5, 2021. She was born on October 20, 1926 in Cardale, Pennsylvania, a daughter of the late Frank and Agnes (Bryja) Pincheck. Agnes married Edward J. Camps on November 16, 1946 in Detroit. He preceded her in death on January 19, 1988. Agnes was a devout and active member of St. Marys Catholic Church in Port Sanilac, where she used her talent in floral arranging, decorating the altar and the church throughout the year, especially during Christmas and Easter. Agnes was a wonderful cook, baker and she enjoyed decorating cakes, many were the lucky recipients of her nut roll at Christmas and she provided many funeral luncheons at the church. Agnes was also a member of the VFW Ladies Auxillary. Agnes is survived by her daughter Nancy (James) Haun of Skanee, Michigan; nine grandchildren Kim (Joe) Rose, Jennifer (Neil) Malmgren, Harlan (Brandy) Camps, Lindsay (Cory) Leppek, Emily (Ben) Knowles, Melissa (Bill) Lerner, Jordan (Paula) Camps, Ryan (Jennifer) Camps and Bradley Camps; numerous grand children and great grandchildren; one sister, Helen Lee of Las Vegas; many nieces and nephews. Agnes was preceded in death by two sons, Peter D. Camps in 1977 and Edward F. “Butch” Camps in 2020; three sisters, Frances Bergen, Joan Warnick and Rose Ann Lizaich; one brother, Henry Pincheck. A Memorial Mass will be held at 11 A.M. on Thursday, May 13, 2021 at the Ave Maria Parish- St. Marys Catholic Church in Port Sanilac, with visiting at the church from 10-11 A.M. Fr. Donald J. Eppenbrock will officiate. Inurnment will be in the Port Sanilac Cemetery. The family would like to thank all of the Sisters at St. Marys for their friendship and many acts of kindess shown to Agnes. Memorials in memory of Agnes may be to Sisters of Our of Mother of Divine Grace.

PORT SANILAC- Agnes Camps, age 94, a resident of Port Sanilac, passed away at her home on Wednesday, May 5, 2021. She was born on October 20, 1926 in Cardale, Pennsylvania, a daughter of the late Frank and Agnes (Bryja) Pincheck. Agnes married... View Obituary & Service Information

The family of Agnes Camps created this Life Tributes page to make it easy to share your memories.

Send flowers to the Camps family.