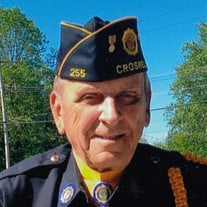 ARTHUR ‘BART’ BARTNICZAK He lived to serve and served to live. ‘Bart’ was born February 11, 1931 and raised in the Lexington, MI area. Bart re-located back to his birthplace which he loved after his servanthood to both the United States Army, the citizens of the City of Detroit and the Police Department, and served others as a Real Estate broker as well. Bart had an opportunity to attend West Point but opted to enlist in the Army at age 17. He spent 9 years in the Army and met his wife to be Esther ( deceased 2003 ) as she too served as a WAC in the Army. Bart was a veteran of the Korean War and left the service the rank of Sergeant. He received numerous service and conduct medals and bronze stars while a member of the Armed Forces. Bart always was proud to serve his country and continued his involvement up to the time of his death. His oldest daughter Marleen followed his service in to the Army herself and has been and is an active member of the American Legion locally to this day. Bart was a proud member of the Detroit Police Department for 25 years and among other duties he walked a beat, was a patrolman, an original member of the Tactical Mobile Unit ( mid 1960s ), Sergeant, Detective, and Lieutenant. He was a teacher, trainer and mentor to many on the force and continued to reunion with the police fraternity after his retirement and proudly wore the silver and gold shield badges. He was badge #284. His daughter Maxine followed his steps as a member of the Detroit Police force herself. He served for years as the Commander of the VFW Post 2382 before its closing in recent years. Bart was active too in the American Legion Post in Croswell and was always active in their fund raising and each year participated and helped organize the ‘poppy day’ event sharing its story. Bart spent every Memorial Day in the parades in both Lexington and Croswell riding in convertibles showing his support and memory of all who served and fought for our freedom. He loved the Army and is a hero to many for this love he both exhibited and shared. When VFW Post 2382 closed Bart made sure their assets and memories were shared with other local posts to keep the memory alive. He lived to serve and served to live. Bart for many years was the President of the local Lions Club in Lexington and helped organized the fund -raisings efforts, accounting needs, day to day operations, and would often be seen with the ‘tootsie rolls’ and at all the many community events to help support the Lions Club mission. Bart was an usher for many years at the then St. Denis Catholic Church in Lexington and now the Ave Maria Catholic Community. He was a mainstay at the Knights of Columbus fraternal service group and would always been seen at the weekly fish fry greeting guests and taking in the money for the event. As with all his services, he loved serving and being involved in all the local activities. Bart was a multiple year recipient of the Silver Lining Awards in Sanilac County for his volunteer efforts and in 2009 received the George Romney Award for his dedication and relentless service to the citizens of Sanilac County and the Lexington Area. As the award states: “Our community could not function without the efforts of those dedicated individuals ready to serve others in need”. Bart was the 4th born of 5 children, 3 sisters, Wanda, Delphine, and Sandy and brother Ray all who preceded him in their deaths. He had many nieces and nephews and a large family with his siblings. He and his wife Esther had 5 children themselves, Marleen ( Robert C. Reynolds deceased 2017), Michael, Maria (deceased 2015 ) Gordon Machleit, Maxine ( Scott M. Bondy ) and Marcy ( Terry Dwyer ). He had much love for his grandchildren Ryan and Summer Machleit, Amanda ( Travis Lutze ), Matthew and Kyle Dwyer, Samantha ( Bryon Scherenberg ), and Rachel Bondy. He adored his great-granchildren Madden, Kashton, Langley, Breslyn, and Emeriss Lutze and Braydon, Elly, and Ty Scharenberg. Great Grandpa was the ‘apple of their eyes’! In 2007, the Good Lord brought Patricia Panackia in to his life and they wed. Their legacy is in their both serving and loving their spouses and families and continuing their new found love, devotion and dedication, servanthood of each other. At the time, Bart promised Pat 5 good years and they intermingled many adult children, numerous grandchildren, and a ‘too many ‘to count great grand-children. They shared everything, traveled, served side by side, and engaged in both an honoring and loving marriage for over 11 years. Dad was comforted knowing that Pat was by his side at the end. Visitation will be from 2-9 on Tuesday at the Pomeroy Funeral Home in Lexington. A Rosary and Knights of Columbus service will be held at 7 P.M. Tuesday evening at the funeral home. Funeral Mass will be held at 11 A.M. on Wednesday at Ave Maria Parish-St. Denis Catholic Church in Lexington, with visiting at the church from 10-11 on Wednesday. Fr. Donald J. Eppenbrock will officiate. Interment with military rites provided by the Croswell American Legion will follow in the St. Denis Cemetery.

The family of Arthur "Bart" Bartniczak created this Life Tributes page to make it easy to share your memories.

ARTHUR ‘BART’ BARTNICZAK
He lived to serve and served to live.
‘Bart’...

Send flowers to the Bartniczak family.