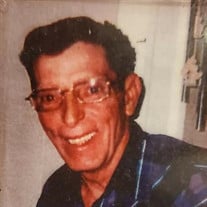 ROSCOMMON- Arthur J. Umphrey Jr. , “Skip”, 71, of Roscommon, MI passed away February 21st, 2022, at home after a long battle with cancer. Skip was born December 25th, 1950, in Port Huron, MI to the late Arthur and Mable Umphrey. He served in the United States Army. He worked for Bob Somma for several years. Skip was a great father and friend with an abundance of knowledge! He battled several different cancers since 2009 with courage and incredible strength. Regardless of what he was going through, he always enjoyed making everyone laugh with his stories. He loved 50s & 60s music. His hobbies included hunting, fishing, the outdoors, and his passion, working on anything with a motor. He could fix anything! “If you can’t buy it, Make it!” Skip is survived by his children Cindy Umphrey, Rick Umphrey, Dennis McQueen, Donovan McQueen, and Theresa McQueen. Grandchildren Rachael Umphrey, Meranda Young, Elizabeth Umphrey, Ricky Umphrey, Dennis McQueen, Donny (April) Lee and Alyssa Rich. 10 great grandchildren, many nieces, nephews, and lifelong friends. His significant other, Debra Fay and her family; Clinton Fay, Alesha Fay and Adasyne Smith. His previous significant other of 26 years, Diane McQueen. He was preceded in death by his parents and 3 sisters, Cindy, Margaret, and Sharon Umphrey. Funeral Services will be held at 2 P.M. on Friday, April 8, 2022 at the Pomeroy Funeral Home in Croswell with visiting at the funeral home from 1:30 to 2 P.M. Rev. Linda Fuller of the Croswell Untied Methodist Church will officiate. Inurnment with Military Rites provided by the Croswell American Legion will immediately follow in the Croswell Cemetery.

The family of Arthur "Skip" J. Umphrey, Jr. created this Life Tributes page to make it easy to share your memories.