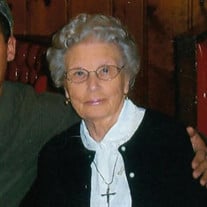 FORESTER- Beatrice Lenore Liput, age 98, a resident of Forester, passed away on Monday, January 11, 2021 at Carols AFC Home in Port Sanilac. She was born on November 10, 1922 in Forester, a daughter of the late Harold and Myrtle A. (Clifton) McCarty. Beatrice married Stanley Liput on May 8, 1945 at St. James Catholic Church in Detroit. He preceded her in death on January 6, 1998. Bea proudly served her country during WWII as a “Rosie the Riveter” at the Murray Aircraft Company, Bea also served in the Women’s Army Air Corps. She raised her family in Taylor, Michigan. Bea was a volunteer teacher and office worker at St. Alfred Catholic Church in Taylor. She had the reputation as the “neighborhood mom” two of the neighborhood girls, Pam and Donna, considered her a second mother. She enjoyed sewing and was also a Girl Scout Leader. Bea was a member of Ave Maria Parish-St. Marys Catholic Church in Port Sanilac. She was a member of the Legion of Mary and a former member of St. Alfred Catholic Church in Taylor. She is survived by her daughter, Dale Linda Eugster of Carsonville, four grandsons, Kurt Eugster of Verona, Matthew (Emily) Eugster of Grand Rapids, Ryan (Carrie) Eugster of Carsonville and Kevin (Tisha) Eugster of Alto; ten great grandchildren, Jacob, Lauren, Timothy, Collin, Sean, Adam, Ethan, Andrew, Corbin and Nolan; two sisters, Ruth (John) Kozlowski of Carsonville and Barbara (Ted) Thayer of Cass City; two sister-in-laws, Delores “Dolly” McCarty of Sterling Heights and Evelyn McCarty of Carsonville; many nieces and nephews, including two very special nieces, Linda Rosser and Sandra Liput. She was preceded in death by two brothers, Harold McCarty, Jr. and Dale McCarty; three sisters, Mildred Brochaert , Jean Marski and Eleanor “Pudge” Miller. Brother-in-law and sister-in-law, Henry and Pauline Liput. Cremation has taken place. A Graveside Service will be held at 2 P.M. on Saturday, May 8, 2021 at the Forester Township Cemetery in Forester, Michigan. Pastor Dan Packer and Fr. Nate Harburg will officiate. Military Rites will be provided by the Croswell American Legion. Memorials in memory of Bea may be made to Spero Pregnancy Center in Port Huron. Arrangements were by the Pomeroy Funeral Home in Carsonville.

FORESTER- Beatrice Lenore Liput, age 98, a resident of Forester, passed away on Monday, January 11, 2021 at Carols AFC Home in Port Sanilac. She was born on November 10, 1922 in Forester, a daughter of the late Harold and Myrtle A. (Clifton)... View Obituary & Service Information

The family of Beatrice L. Liput created this Life Tributes page to make it easy to share your memories.

Send flowers to the Liput family.