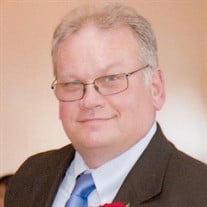 Brad Erwin Trowhill, a son, husband, father, grandfather, brother, and uncle, 60 of Deckerville, Michigan, departed this earthly life on November 23, 2020. He was welcomed to eternal life by his father, Robert Trowhill, step-father, Howard Hooper, mother and father in law, Donald and Barbara Kunze, and first born son, Brandon Trowhill. Brad was born September 13, 1960 in Deckerville, Michigan to Robert and Delores Trowhill. In his youth, Brad was a boy’s boy; cleverly planning adventures and bouts of fun with or even against his siblings. Brad attended Croswell Community Schools until moving to the Deckerville area and graduating as a member of the Deckerville Class of 1978. Brad married his Deckerville High School sweetheart and country road neighbor, Jody (Kunze) on August 9, 1980. Young Brad and Jody met on Mills Road. Finding it to be the kind of place to raise a family, they made plans to build a family in that same neighborhood. Brandon (Danielle), Justin (Shannon), and Tasha (Josh Sweet) were the center of Brad’s world until the grandchildren came along. Ryker, Karleigh, Tyler, Kollins, and Aaron were easily the greatest joy of Brad’s life. Illustrating his strong family devotion, Brad will be known as a man who worked tirelessly to provide for his wife and children, attended countless sporting events and school programs, and invested time assisting his parents and in-laws. His love of family was reflected in his actions and words; genuine, honest, quiet, and strong. Brad recently completed a lengthy restoration of his father’s John Deere 1010 tractor, reminding us all of the importance of honoring family heritage. Brad held a deep love of family, enjoyed deer hunting, wood working, time spent in woods and creek flats, and all things U of M football. Brad is survived by his loving mother, Delores (Surbrook) Hooper (Bill Cliff) and siblings, Cheryl (Nichol), Wayne (Carol), Debbie (Clark Brewster), Greg (Kim), Kevin (Candace) and Alan Hooper. Brad will be remembered as an uncle by a multitude of nieces and nephews, and great nieces and nephews. Public visitation will take place on Friday, November 27 from 3 - 9 p.m. and Saturday, November 28 beginning at 10 a.m., until the time of funeral service at 11 a.m., at Pomeroy Funeral Home in Carsonville. In lieu of flowers, please consider supporting the Goodtimers.

The family of Brad E. Trowhill created this Life Tributes page to make it easy to share your memories.

Send flowers to the Trowhill family.