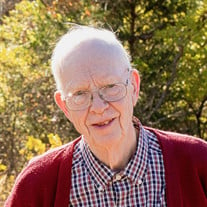 NEWBERRY AND FORMERLY OF CARSONVILLE- Carl Lowell Klaty, age 87, of Newberry, Michigan, passed away on June 24, 2021, at the Ascension Via Christi Hospital in Manhattan, Kansas, after a brief illness, surrounded by his loving family. He was born on August 15, 1933, in Carsonville, Michigan, the son of George and Clara (Brown) Klaty. Carl was married to Mary Beardslee on December 21 1956. They resided in lower Michigan until 1976 when they moved to Newberry. She preceded him in death on June 25 2009. He later married Carole Killin, in 2011. She also preceded him in death on April 19 2015. Carl chose to serve the Lord at a young age and remained true to that calling all of his life. It brought him the most joy in life, so much that he was always inviting others to enjoy the gospel story. This being his priority in life, he also worked in the family business of plumbing heating and electrical until he retired. Carl and Mary immensely enjoyed two trips to China and in his later years reminisced about these trips to others. He also enjoyed hunting and fishing, including many family fishing trips to Canada. Survivors include his two sons: Kevin Klaty of Waukesha, WI, and Keith Klaty and his wife Annette of Newberry MI; two siblings: Roy Klaty of Crawfordsville, IN, and Norma Brown of Gwinn, MI; ten grandchildren: Darren Klaty (Amberly), Travis Klaty (Courtney), Lance Klaty, Caleb Klaty (Adria), Zachary Klaty (Ashley), Stephanie Morrell (Calvin), Courtney Krisher (Ted), Devery Klaty (Brianna) and Riley Klaty (LeAnne); and nine great-grandchildren: Conner, Breah, Olivia, Maddilyn, Jovi, Ava, Myles, Remi Lou and Kezia. Funeral services will held at 11:00 A.M on Monday, June 28, 2021 at the home of Jim Klaty, with visiting from 10- 11 A.M. Interment will follow in the Washington Cemetery.

NEWBERRY AND FORMERLY OF CARSONVILLE- Carl Lowell Klaty, age 87, of Newberry, Michigan, passed away on June 24, 2021, at the Ascension Via Christi Hospital in Manhattan, Kansas, after a brief illness, surrounded by his loving family. He... View Obituary & Service Information

The family of Carl Lowell Klaty created this Life Tributes page to make it easy to share your memories.

Send flowers to the Klaty family.