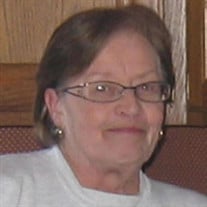 Not sure what to send?

Carol Ann Gill, age 80, of Sandusky, passed away Saturday, October 30, 2021 at Stonegate Village in Sandusky. She was born March 11, 1941 in Croswell, daughter of the late Edgar and Belle (Murray) Straffon. Carol was married to Edward L. Gill on February 11, 1961 in Croswell. They were married for 57 years before he preceded her in death on April 19, 2018. Carol was a member of St. Joseph Catholic Church – Holy Family Parish. In her working years, she was a dedicated and hard-working employee – working for more than 30 years at what was originally called Yale Rubber and for several years at Jerry’s Foodland Deli. She was a devoted mother – doing anything and everything she could for the benefit of her children. She was a loyal, creative, and honest person who was known to “tell it like it is”. One of her most enduring interests was playing bingo. She was involved in the early days of Sandusky Athletic Boosters’ Saturday night Bingo, and played the game to the very end – recently helping a fellow resident at Stonegate to play who was legally blind. She is survived by her son, David (Marie) Gill; 2 daughters, Diane Clark and Debbie (Gary) Simonds; 8 grandchildren, J.R. (Philip), Justin (Kelley), Nathan, Sydney (Mackenzie), Matthew (Greta), Elizabeth, Mitchell, and Mason; 2 great grandchildren, Cayden and Lucy. Carol was preceded in death by her granddaughter, Megan, and sisters, Beverly Jolley, Linda Hall, and Janet Straffon. A celebration of life will be held 1-5 PM Saturday, June 25 at the Forester Park.

The family of Carol Ann Gill created this Life Tributes page to make it easy to share your memories.