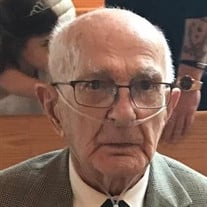 PORT SANILAC- Casmere J. “Casey” Mach, age 94, of Port Sanilac and formerly of Eastpointe passed away on Monday, January 29, 2018 at the Stonegate Village Assisted Living in Sandusky. He was born on July 5, 1923 in Detroit a son of the late Frank and Mary (Kapusta) Mach. He married Elizabeth Mette on April 25, 1944 in Detroit. She preceded him in death on September 16, 2004. Casey later married Virginia Massman, she also preceded him in death on October 5, 2016. Casey proudly served his country in the U.S. Army during WWII. Casey was a journeyman Sheet Metal Worker and he belonged to the Sheet Workers International Union Local #292. He was a member of St. Mary’s Catholic Church in Port Sanilac, where he served as an Altar Server. He was also a 4th Degree member of K of C #7255; Port Sanilac Lions Club; Port Sanilac Village Council; Port Sanilac Harbor Commission; and with his wife Virginia, attended Forester United Methodist Church. When living in Eastpointe, Casey was a member of St. Basil Catholic Church where he served as an usher, he also belonged to K of C Leo the XIII Council. He is survived by his five children, Stephen (Jean) Mach, Allen (Elaine) Mach, Kathleen (Dennis) Chwilka, Raymond (Diana) Mach and Jeffrey (Vicki) Mach. 7 grandchildren and 13 great grandchildren. Visitation will be 2-9 P.M. Wednesday, January 31, 2018 at the Pomeroy Funeral Home in Lexington. K of C Rosary 7 P.M. Wednesday evening. Funeral Mass will be held at 11 A.M. on Thursday, February 1, 2018 at Ave Maria Parish- St. Mary’s Catholic Church in Port Sanilac, with visitation at the church from 10-11 A.M. Fr. Donald J. Eppenbrock will officiate. Military Rites provided by the Croswell American Legion Post #255. Interment will be at Resurrection Cemetery in Clinton Twp., MI Memorials in memory of Casey may be made to the Sisters of Our Mother of Divine Grace at St. Mary’s Church in Port Sanilac, MI.

The family of Casmere J. "Casey" Mach created this Life Tributes page to make it easy to share your memories.

Send flowers to the Mach family.