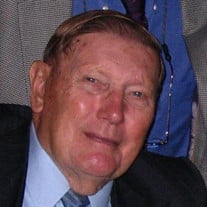 Clifford E. Behrens, age 94, passed away peacefully on Monday, October 2, 2017, at Barss Residential in Fort Gratiot, Michigan. He had been visited by his family and pastor in previous weeks. Cliff was born in Zilwaukee, Michigan on June 4, 1923 to Reinhart and Elta Behrens. He lived most of his life in Michigan, and was a graduate of Arthur Hill High School in Saginaw. After high school, Cliff attended General Motors Institute for two years before enlisting in the US Navy. During WWII he served in the submarine service, and was part of an elite crew that moved captured Japanese submarines from Japan to Pearl Harbor for test and evaluation by the USN. Soon after he was discharged, he met the love of his life, and future wife, Gwen Benkert, when she worked as a legal secretary in Saginaw. They were married for 65 wonderful years before her passing in 2014. After their marriage, Cliff continued his education at Michigan State University while Gwen worked on campus, and in 1949 he graduated with a BS in Civil Engineering. During his professional career he worked primarily in engineering and sales for Standard Oil, Bituminous Materials, the Michigan Asphalt Paving Association, Gustafson Oil, and the St. Clair County Road Commission, where he eventually retired. Over his lifetime Cliff was active in his church councils, particularly at St. John’s Lutheran Church in Saginaw; and he enjoyed coaching his son’s basketball teams, and rarely missed any of his children’s or grandchildren’s church and school events. He relished the role of “grandfather,” and his grandsons always looked forward to a visit with grandpa. Cliff loved his Lord, his family, his friends, and his country. He was always a “big kid” at heart, and worked to play, though he could never really decide which he liked better, music or sports. He played the piano with gusto and loved playing the harmonica; he was particularly fond of golf, playing it well into his 80’s, and March Madness was another of his favorites. Cliff remained a diehard Spartan fan to the very end, and strongly encouraged others to root with him. He was a natural-born card player, and nothing excited him more than a rip-roaring game of euchre with family or friends. Cliff always looked forward to getting together with others in his Saginaw and Okemos potluck groups and, along with his wife, was adored everywhere by those who came to know him. He was good-natured and outgoing, never without a friendly greeting or a little kidding, even for strangers. Good food always put a smile on his face, particularly when prepared by his mother, wife and daughters, and he never met a desert he didn’t like. Cliff is survived by his son, Clifford, and daughter-in-law, Susan, of Madison, New Jersey; his daughter, Brenda Eisele, and son-in-law, Scott, of Avoca, Michigan; his son, Craig, and daughter-in-law, Dianna, of East Lansing, Michigan; and his daughter, Holly Behrens, and Joseph Bottenhorn, of Lake Leelanau, Michigan. He is also survived by grandsons Christopher Behrens of East Lansing, Michigan; Colin and Dylan Johnstone of Traverse City, Michigan; Stuart Behrens of Savannah, Georgia; and Jameson Eisele of Ann Arbor, Michigan. Funeral Services will be held at 11 a.m. on Monday, October 16, in St. Matthew’s Lutheran Church. Rev. Barry Sheldon will officiate. Burial will be in the Lexington Cemetery Please make memorials to either St. Matthews Lutheran Church or Village of Lexington Fire Department, 7227 Huron Ave, Lexington, MI 48450.

Clifford E. Behrens, age 94, passed away peacefully on Monday, October 2, 2017, at Barss Residential in Fort Gratiot, Michigan. He had been visited by his family and pastor in previous weeks. Cliff was born in Zilwaukee, Michigan on June 4,... View Obituary & Service Information

The family of Clifford E. Behrens created this Life Tributes page to make it easy to share your memories.

Send flowers to the Behrens family.