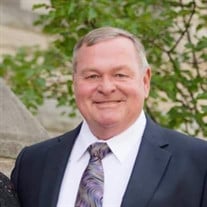 JEDDO- David M. “Razor” Gillett, age 73, a resident of Jeddo passed away on Tuesday, November 2, 2021 at the McLaren Hospital in Port Huron. He was born on November 18, 1947 in Jeddo, a son of the late John “Joe” and Helen (McCabe) Gillett. Dave married Wendy M. Wilson on May 20, 2006 in Yale. Dave was a Sales Representative for Tri County Equipment in Sandusky for many years. He also operated the family farm, Fisher Valley Farms in Jeddo. Dave was devoted member of the Jeddo Lions Club, where he served as a District Officer; a member of St. Denis Catholic Church, Sons of the American Legion in Croswell, the Moose Lodge and Eagles Club. Dave is survived by his wife, Wendy Gillett of Jeddo; one son, David (Brenda) Liebler of Brown City, two daughters, Kellee Dittenber of Lewiston and Melinda (Brian) Priehs of Avoca; seven grandchildren and five great grandchildren; two sisters, Mariol Schmitt of Marysville and Barbara (Rollin) Stocker of Marysville; a sister-in-law Edna Gillett of Ohio; a brother-in-law and sister-in-law, William and Janet Wilson of Port Huron and a sister-in-law, Linda Manns of Yale; several nieces and nephews and many friends. Dave was preceded in death by two grandchildren; his infant sister, Kathleen Gillett and his brother, Stewart Gillett; a brother-in-law, Richard Schmitt. Visitation will be from 2-8 P.M. on Friday at the Pomeroy Funeral Home in Lexington. Funeral Mass will be held at 11 A.M. on Saturday at the Ave Maria Parish-St. Denis Catholic Church in Lexington, with visiting at the church from 10-11 A.M. on Saturday. Fr. Donald J. Eppenbrock will officiate. Interment will follow in the Mt. Hope Catholic Cemetery in Croswell. Pallbearers will be Erik Dittenber, Jared Dittenber, Nicholas Priehs, Joshua Allen, Shon Gillett and Eric Stocker. Memorials in memory of Dave may be to the Jeddo Lions Club or St. Denis Catholic Church. Arrangements were by the Pomeroy Funeral Home in Lexington.

The family of David M. Gillett created this Life Tributes page to make it easy to share your memories.

Send flowers to the Gillett family.