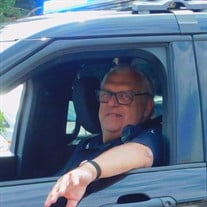 Following a courageous battle with cancer, David Hall of Croswell passed away on September 16, 2021 at the age of 68 years. David was born in Croswell to Edward and Donna Hall. He grew up and attended school in Croswell and began serving his community at 17 years old as a police cadet in Lexington. He attended Flint Police Academy (and he pointed out the tower every single time we drove by) and went on to serve as a patrolman in Peck. Then he served as a deputy; a sergeant; a detective; and the founder, member, and supervisor of numerous special units at the Sanilac County Sheriff Department. Following his retirement from the Sheriff Department, he took great pride in being the Chief of Police of his hometown of Croswell. When he decided he was ready for a slower pace, he managed to stay retired a couple weeks before joining the Lexington Police Department as a “part time” patrolman. All who knew him knew part time meant as much as possible. His time as a police officer serving his community was a huge part of who he was for over 50 years, but his family meant even more to him. He is survived by the love of his life, JoAnn, and their three children: Ken (Tammy) Hall, Andy Hall, and Danielle (Charles) Cunningham. He loved to spoil his grandchildren: Keely, Adam, Conner, Dylan, Ellie, and Logan. With them, he always found an excuse for more ice cream, brownies, popcorn, or one more ride on the Ranger. He is also survived by his mother, Donna Hall, and siblings Larry (Linda), Barb (Mark), and Nancy as well as many other family and friends he considered family and his first responder family. David was preceded in death by his father, Edward Hall. Visitation will be held at the Croswell Fire Department on Thursday, September 23rd from 3 to 7pm and on Friday, September 24th from 12-1pm preceding the memorial service. A memorial service will be held at the Croswell Fire Department on Friday, September 24th at 1pm and followed by a police procession around Croswell and Lexington. A meal is not planned due to pandemic concerns. Memorials can be made to the donor’s choice or to JoAnn Hall for establishment of a scholarship fund for first responders in Dave’s honor.

Following a courageous battle with cancer, David Hall of Croswell passed away on September 16, 2021 at the age of 68 years. David was born in Croswell to Edward and Donna Hall. He grew up and attended school in Croswell and began serving his... View Obituary & Service Information

The family of David L. Hall created this Life Tributes page to make it easy to share your memories.

Following a courageous battle with cancer, David Hall of Croswell...

Send flowers to the Hall family.