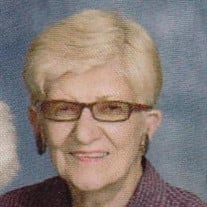 APPLEGATE- Diane Magdalen Neverouck , age 87, a resident of Applegate, passed away peacefully on Monday, April 12, 2021 at the McLaren-Port Huron Hospital in Port Huron. She was born on December 17, 1933 in Detroit, to the late John and Mary (Shepherd) Neverouck She spent her retirement years living on her beautiful property on the lake with her sister, Rita Neverouck who preceded her in death in 2016. Diane and her sister shared their love of cats and welcomed several at a time in their home. She was known to never turn down a stray. Diane enjoyed working outdoors on her property and took time to enjoy the nature around her. She treasured her ability to wake up watching the sun rise from the water of Lake Huron. Diane graduated from the University of Detroit in 1969. For many years, Diane worked in finance for General Motors. She was involved with the General Motors Women’s Club, maintaining friendships with members into her retirement. Diane was involved with youth outreach programs while working in Detroit. She enjoyed traveling and remained active with sports and outdoor activities. She will be remembered for her witty remarks and her devotion to her faith. Diane and her sister often entertained at their house and frequently invited members of the clergy and religious to their house during holidays, ensuring that no one would be alone. Diane was member of the Ave Maria Parish- St. Marys Catholic Church in Port Sanilac and the Sanilac County Historical Society. She was also a very active member with Project Blessing in Carsonville for many years, serving as treasurer for the organization. She was generous and supported many charities and causes. Diane was known as “Aunt Mag” by her family in New Jersey. She always found time to visit them when on business trips to New York City, commonly joking about New Jersey accents of her brother-in-law, nephews and niece. Diane is survived by her sister Dolores Anilonis of Pt. Pleasant, NJ; her nephews, James Anilonis, Christopher Anilonis, Bryon Anilonis, and niece Rita Settembrino; eleven grand nieces and nephews, Kaitlin, Michael, Chelsea, Kimberly, Hailey, Gregory, Daniel, Eric, Amy, Madeleine and Ethan. Please join us celebrating her life at a Memorial Mass at 11 A.M. on Friday, May 7, 2021 at the Ave Maria Parish-St. Denis Catholic Church in Lexington. Fr. Donald J. Eppenbrock will officiate. Inurment will follow in the St. Denis Cemetery. Memorials in memory of Diane may be made to the Sanilac County Humane Society or Project Blessing.

APPLEGATE- Diane Magdalen Neverouck , age 87, a resident of Applegate, passed away peacefully on Monday, April 12, 2021 at the McLaren-Port Huron Hospital in Port Huron. She was born on December 17, 1933 in Detroit, to the late John and Mary... View Obituary & Service Information

The family of Diane M. Neverouck created this Life Tributes page to make it easy to share your memories.

Send flowers to the Neverouck family.