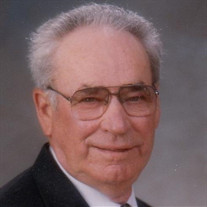 CROSWELL- Donald Thomas Clark, passed away in the early morning hours of January 12, 2018. He was born December 9, 1930, the ninth of eleven children born to Wesley and Nettie (Smith) Clark. In 1945, at the age of 15, he lied about his age and joined the U.S. Navy. He served in Pearl Harbor, Hawaii before returning to Jeddo. He married Elizabeth (Bette) Papineau on June 24, 1950. The two of them worked together for several years to earn money to purchase their farm Wildcat Road, where they raised cattle, crops and five children. Don will be remembered as the farmer with the “oreo cookie” cows. For many years, Don was a member of a bowling team at Kautz Lanes. In his later years, he was a devoted follower of sports on TV, especially the Detroit Tigers and American Ninja Warriors. He was member of the American Legion Post # 255, Croswell. Don is survived by his wife of 67 years, Bette; his children, Christine (Don) Rankin of Croswell, Chip (Linda) Clark of Croswell, Sandra Clark of Marysville, Randy (Linda Sembrano) Clark of Worth Twp., and Tracy (Ed) Flaherty of Farmington Hills; grandchildren Brooke (Mike) Miller, Chad (Carrie) Rankin, Ryan Rankin, Kelly (Kelly) King, Wayne (Cindy) Newton, Jennifer (Corey) Hampton, J.R. (Phillip) Clark, Justin (Kellie) Clark and Nathan Clark; 18 great grandchildren and 9 great great grandchildren. He is also survived by his brothers Lawrence (Diane) Clark and Lesley (Shirley) Clark, his sister Shirley (George) Stencil; his brother in law Edward Papineau and a daughter in law, Diane Clark. He was preceded in death by an infant daughter, and five brothers and two sisters. Visitation will be from 2-9 P.M. Monday at the Pomeroy Funeral Home in Croswell. Funeral services will be held at 11 A.M. on Tuesday at the funeral home, with visiting from 10-11. Interment will follow in the Mt. Hope Cemetery, with military services provided by American Legion Post #255, Croswell. Memorials in memory of Don may be made the Croswell American Legion.

CROSWELL- Donald Thomas Clark, passed away in the early morning hours of January 12, 2018. He was born December 9, 1930, the ninth of eleven children born to Wesley and Nettie (Smith) Clark. In 1945, at the age of 15, he lied about his age and... View Obituary & Service Information

The family of Donald Thomas Clark created this Life Tributes page to make it easy to share your memories.

CROSWELL- Donald Thomas Clark, passed away in the early morning...

Send flowers to the Clark family.