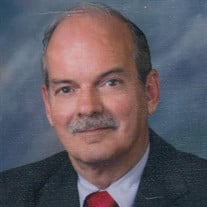 Donny Hunt, age 67, a resident of Croswell, died on Thursday, September 26, 2019 at McLaren Port Huron Hospital. He was born August 30, 1952 in Detroit, son of the late Holbert and Gwendolyn (Wahl) Hunt. Don married Debra M. McColl on April 14, 1973 in Port Huron. Donny was former owner of Applegate Market, and drove truck for Earl Smith Distributing for 20 years. He was a member of Sanilac County Board of Commissioners from 2001-2016, Croswell F&AM Lodge, Board of Directors Region 7 Council of Aging, and former Worth Twp. Trustee. He is survived by his loving wife, Debra; 2 sons, Michael (Janet) of Port Huron, and Nicholas (Kristi) of Livonia; one daughter, Danielle (Brad) Sharpe of Croswell; 5 grandchildren, Della, Eylie, Zachary, Kora, and Alexandria; one brother, Nat; and 6 sisters, Virginia, Esther, Rachel, Becky, Laurie, and Eva. He was preceded in death by his brothers, Tim and Roland, and sister, Nonie. Visitation will be from 2-9 P.M. on Monday at the Pomeroy Funeral Home in Croswell. Funeral services will be held at 11 A.M. on Tuesday at the funeral home with visiting from 10-11 A.M. Pastor Darwin Reeves of the Fellowship Bible Church will officiate. Interment will be in the Kinney Cemetery. Memorials may be made to the Region 7 Council on Aging.

The family of Donald Andrew Hunt created this Life Tributes page to make it easy to share your memories.

Donny Hunt, age 67, a resident of Croswell, died on Thursday,...

Send flowers to the Hunt family.