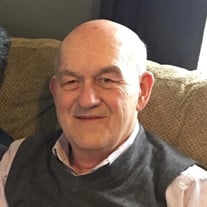 CROSWELL- Donald Charles Wixson of Sandusky and formerly of Croswell, Michigan was embraced into God’s arms on Thursday, November 5, 2020 after a brief fight with cancer. Dad was born on January 25, 1947 to the late Harriet and Charles Wixson in Detroit, Michigan. The family moved to Lexington, Michigan in his teen years where he graduated from Cros-Lex High School in 1965. He then went on and received a bachelor’s degree in business from Central Michigan University. He pursued a career in banking that took him from the thumb, to west Michigan and Indiana that ultimately returned him to Sandusky. During his early years of retirement, Dad answered the calling to become a servant of the Lord as a lay minister with the Huron Presbytery throughout the thumb area. He often spoke of being humbled by God’s gift to spread the Lord’s teachings to so many. Dad also enjoyed giving back to his community through his involvement with organizations that included the Free Masons, Shriners, Kiwanis and local events. Don is survived by his daughter, Lisa and Tim Porter of Chillicothe, Ohio and his son , Vance “Vinny” and Jessica Wixson of Hopkins, Michigan; seven grandchildren, Zack, Porter, Saige, Kipton, Zackery, Tyler and Kody; one great grandchild, Amora and the mother of his children, Sheilah Wixson. He also leaves behind his fiancé and caretaker, Mary Lynn Beals. He was preceded in death by his son, Jeffery Donald Wixson on July 9, 1988. Visitation will be 2-8 P.M. Monday at Pomeroy Funeral Home in Croswell. Masonic Service will be held at 7 P.M. Monday evening. Funeral services will be held at 11 A.M. Tuesday at the First Presbyterian Church in Croswell, with visiting at the church from 10-11 A.M. Rev. Dr. H. Leigh Holder will officiate. Inurnment will be in the Croswell Cemetery. Memorials in memory of Don may be made to the Croswell First Presbyterian Church or Masonic Lodge F& AM #469.

CROSWELL- Donald Charles Wixson of Sandusky and formerly of Croswell, Michigan was embraced into God&#8217;s arms on Thursday, November 5, 2020 after a brief fight with cancer. Dad was born on January 25, 1947 to the late Harriet and Charles... View Obituary & Service Information

The family of Donald Charles Wixson created this Life Tributes page to make it easy to share your memories.

CROSWELL- Donald Charles Wixson of Sandusky and formerly of Croswell,...

Send flowers to the Wixson family.