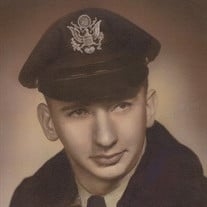 Earl R. Gundlach, age 85, of Croswell, passed away Thursday, September 20, 2018 at Troy Beaumont Hospital. He was born August 7, 1933 in Richmond, son of the late Elmer and Clara Gundlach. Earl married Pilar del Pilar on June 2, 1961 in Angeles City, Philippines. She preceded him in death August 26, 2009. Earl’s dream was to become a jet fighter pilot, and he lived that dream as a decorated member of the United States Air Force, flying F-100 Super Sabres and earning the rank of Lt. Colonel. The other joys of his life were family, church, dancing, hunting and gunsmithing. He was a member of St. John Lutheran Church in Port Sanilac. He is survived by his son, Edward (Jane) of West Bloomfield; daughter, Gigi Hugo of Ferndale; brother, Theodore of Bad Axe; 6 grandchildren, Christina, Jessica, Harrison, Nathan, Sarah, and Ethan; and 5 great grandchildren. Earl was preceded in death by his sisters, Lorraine and Frances; and brothers, Lawrence and Richard. Funeral Services will be held 4 PM Sunday, September 23 at St. John Lutheran Church in Port Sanilac. Rev. Barry Sheldon will officiate. Burial will be in the Croswell Cemetery. Military Rites by the Croswell American Legion Post #255. Friends may call from 2-4 PM Sunday at the church. Memorials may be made to the church.

The family of Earl R. Gundlach created this Life Tributes page to make it easy to share your memories.

Send flowers to the Gundlach family.