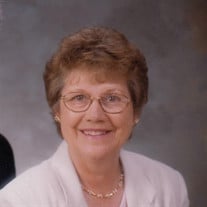 CROSWELL- Elizabeth Mary “Bette” (Papineau) Clark, age 86, of Croswell passed away on Sunday, February 3, 2019. She was born on May 23, 1932, in Port Huron , the daughter of the late Enos and Mattie Papineau. She married Donald T. Clark on June 24, 1950. Don passed away on January 12, 2018. Bette and Don were partners operating for several years their family farm on Wildcat Road. She worked outside the home to help earn the money to purchase the farm. There they raised five children; Christine (Don) Rankin of Croswell, “Chip” (Linda) Clark of Croswell, Sandra Clark of Marysville, Randy (Linda Sembrano) Clark of Worth Twp. and Tracy (Ed) Flaherty of Farmington Hills. In addition to working on the farm, Bette served as the deputy clerk and deputy treasurer for Worth Twp. She was involved with the activities of her children and grandchildren, volunteering with the Little League, Camp Fire Girls and the school, also attending sports, plays and band concerts. She was a league bowler and enjoyed many crafts. Her favorite past-time was reading and when her vision failed her she turned to Talking Books from the Library for the Blind, and everyone knew not to call when “Jeopardy” was on. In addition to her five children, Bette is survived by her grandchildren, Brooke (Mike) Miller, Chad (Carrie) Rankin, Ryan Rankin, Kelly (Kelly) King, Wayne (Cindy) Newton, Jennifer (Corey) Hampton, J. R. “Phillip” Clark, Justin (Kelley) Clark and Nathan Clark; 18 great grandchildren and 11 great great grandchildren. She is also survived by her brother in law Lesley (Shirley) Clark, sister in law Shirley (George) Stencel, sister in law Diane Clark and daughter in law Diane Clark. Bette was preceded in death by an infant daughter, Ann and four brothers, Harold, Hank, Jim and Ed Papineau; three sisters Genevieve, Virginia and Dorothy. Funeral Mass will be held at 11 A.M. Friday, February 8, 2019 at Ave Maria Parish-St. Denis Catholic Church in Lexington. Visiting at the church from 10-11 A.M. Friday morning. Fr. Donald J. Eppenbrock will officiate. Interment will be in the Mt. Hope Catholic Cemetery in Croswell Memorials can be made to the Sanilac County Humane Society 38467 W. Sheldon Carsonville, Mi. 48419, Talking Book Library P.O. Box 30007, Lansing, Mi. 48909 or Mass Cards to St. Denis.

The family of Elizabeth M.. "Bette" Clark created this Life Tributes page to make it easy to share your memories.

Send flowers to the Clark family.