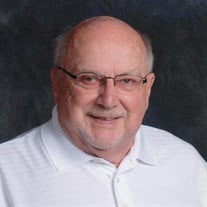 Eugene D. Oldford passed away peacefully on Monday, February 25, 2019 at Blue Water Hospice Home after suffering a stroke. He was born to parents Stephen and Clara (Hallett) Oldford on July 28, 1932 in Detroit. He graduated from Croswell-Lexington High School in 1950 and attended St. Clair County Jr. College and the University of Michigan. He served in the U.S. Army during the Korean war, stationed in Panama. Gene, along with his brother Bill, acquired Huron Tool and Manufacturing, now Huron Inc., in Lexington, from their father Stephen in 1958. The company was sold to US Industries in 1968. He founded Oldford and Associates, an automotive manufacturer’s representative sales firm, in 1973 where he continued to work until his unexpected death. Gene was also co-founder of Black River Manufacturing, Port Huron, along with partners Jarold Hawks and Isaac Lang Jr. Always active in his community, Gene served in various leadership roles on the Worth Township Board, Boy Scouts of America, Jaycees, Croswell-Lexington Little League, Masonic Lodge and Trinity Episcopal Church. He loved horses and was very active in harness horse racing. He was a member of the United States Trotting Association and the Michigan Harness Horsemen’s Association where he was honored into its Hall of Fame. He served as president of Harness Horsemen International in 2008 receiving the HHI Person of the Year Award. Over the years, Gene gave generously to his community establishing the Stephen and Clara Oldford Scholarship fund to assist students attending St. Clair County Community College. Gene is survived by his three children, Stephen (Gale) Oldford of Lexington, Susan Zappa of Clyde and Laurie Oldford of Port Huron. He was blessed with five loving grandchildren; Michelle (Manny) Chavez, Troy (Kelly) Oldford, Kara Oldford, Joey Zappa and Vincent Oldford, and three great-grandchildren; Alex and Bensen Chavez, and Brooklyn Oldford. He is also survived by special friend, Nancy Edmonson, brother, William Oldford, sister-in-law Jill Meyers, niece Kathy (Gwen) Johansen, and nephews Will (Ann Marie) Oldford and Douglas (Amy) Gough. Gene was preceded in death by Sandra S. Oldford, Barbara L. Edwards and Joseph R. Zappa. Gene was a loving and generous man who made friends wherever he went. He deeply loved his family and friends and lived a very active and full life. Please join the family to celebrate Gene’s life. A visitation will take place on Friday, March 1, 2019 at the Pomeroy Funeral Home in Lexington from 2 p.m. to 9 p.m. On Saturday, March 2, 2019, a funeral service will be held at 11:00 a.m. in Trinity Episcopal Church, Lexington, with visitation in the church beginning at 10:00 a.m. until the time of the service. Memorials appreciated in Gene’s name may be offered to Trinity Episcopal Church, Blue Water Hospice or New Vocations Race Horse Adoption Program.

Eugene D. Oldford passed away peacefully on Monday, February 25, 2019 at Blue Water Hospice Home after suffering a stroke. He was born to parents Stephen and Clara (Hallett) Oldford on July 28, 1932 in Detroit. He graduated from Croswell-Lexington... View Obituary & Service Information

The family of Eugene D. Oldford created this Life Tributes page to make it easy to share your memories.

Send flowers to the Oldford family.