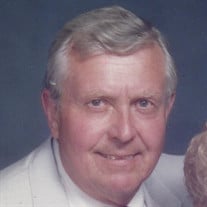 Frank Tonge Jr. passed away on Thursday May 30, 2019 at Bluewater Hospice House in Marysville. He was born May 19, 1932 in Detroit, to the late Frank Tonge and Madeline (Suiter) Tonge. He married Joan Connelly on Sept 22, 1956. She preceded him in death on April 27, 2015, after 58 years of wedded bliss. Frank’s life was one of dedication to his family, friends, community, and his country. Shortly after graduating from Jonesville High School in 1950, he joined the US Air Force and served nearly 2 years in Korea in the Intelligence Division during the war. He returned to Detroit and became a Detroit police officer, serving 5 years at the 13th precinct. It was then that he met the love of his life, Joan. They married and moved to Applegate as the proprietors of the Applegate Inn. Frank soon joined the fire dept., and later became chief. In 1962, he was hired as a sales agent by AAA, and he spent 33 years there, many years ranking near the top in the state. With 4 children, for many people that would be enough. But Frank joined the Croswell fire dept. and totaled 33 years as a fireman. He also became an ambulance driver, back when all you needed was a driver’s license, know CPR, and have a desire to help those in need any time of day or night. He worked as a Croswell police officer and filled the role of chief several times. He was a Sanilac County sheriff’s deputy for 2 decades. Later in life he became a city councilman for 17 years, including 5 as Mayor. He was also past President of the Cros-Lex Babe Ruth league. He also devoted a lot of his time to special projects in the community, spending many hours working with then State Rep Quincy Hoffman to secure funding for the bike path between Croswell and Lexington. And he, along with William Benedict, came up with the idea for the popular Policeman-Fireman’s Field Day. Many nights of planning were needed to establish it, and many hours of his life were spent each year to continue the event. Frank was a member of American Legion Post 255, and VFW Post 2382, where he served in various leadership positions. His humor and infectious smile will be missed, but we also lost a gentleman and a true patriot who spent his life serving others. He is survived by 3 children, Matthew (Kay) Tonge, Beth (Paul) Leon, and Brian (Mary) Tonge; 10 grandchildren and 7 great-grandchildren; his son in law, Curt Jacobs and his brother, Lewis (Karen) Suiter. He was preceded in death by his beloved daughter, Gina Jacobs in 2012, his stepfather, Lewis Suiter, and sister, Marianne (Walter) Peltz. Funeral Services will be held 11:00 AM Tuesday June 4, 2019 at the First Presbyterian Church in Croswell. Don Wixson, CP will officiate. Interment will follow in the Mt. Hope Catholic Cemetery in Croswell, with Military Honors provided by the Croswell American Legion. Visitation will be 1 – 4 PM Sunday and 4 - 8 PM Monday at Pomeroy Funeral Home in Croswell, and 10 – 11 AM Tuesday at the church. In lieu of flowers, memorials may be made to the Croswell Fire Department for Equipment Needs.

Frank Tonge Jr. passed away on Thursday May 30, 2019 at Bluewater Hospice House in Marysville. He was born May 19, 1932 in Detroit, to the late Frank Tonge and Madeline (Suiter) Tonge. He married Joan Connelly on Sept 22, 1956. She preceded... View Obituary & Service Information

The family of Frank Tonge created this Life Tributes page to make it easy to share your memories.

Send flowers to the Tonge family.