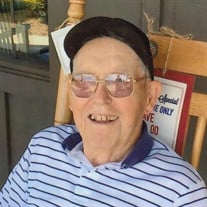 Fred Robert Bartley, 96, of Lexington, died Friday, June 5, 2020, at McLaren Port Huron Hospital. He was born April 20, 1924, in Croswell to the late Claude and Samantha (Dunsmore) Bartley. He and Elna M. Kellerman were married Sept. 17, 1949, in Detroit. They shared over 64 years of married life together. She preceded him in death on January 8, 2014. Fred was a World War II veteran of the U.S. Army, European Theater, stationed in France and Belgium, 747th Engineer Base Equipment Co. He operated a crane and other such equipment with the company along with loading, unloading and assembling equipment and supplies. He drove truck to deliver supplies for rebuilding bridges throughout France. He was member of Croswell American Legion Post #255. Fred worked for Michigan Sugar Company for 45 years retiring in 1987. Alongside his wife, Elna, they owned and operated Bartley Orchards where they grew and sold apples, peaches, pears, plums and cherries until his death. Everyone knew him as the Apple Man. Along with the orchard, his hobbies including riding Harley Davidson motorcycles and woodworking; he built small speed boats, canoes, clocks, and many other projects. Fred and Elna took their children on many camping trips and were members of the Wally Byam Caravan Club where they would travel with their Airstream to the annual rallies across the United States. Fred loved spending time with his children, grandchildren and great granddaughter. Fred and Elna had several dogs that he would walk everyday around Lexington, he enjoyed visiting with anyone who he would meet. Fred was an active member at St. Matthew Lutheran Church, where he held multiple roles, including chairman of the congregation, trustee, elder and usher. He loved sharing his faith in Jesus with others and enjoyed going to make visits on people in their homes. Surviving are son Gary (Patty) of Dowagiac; daughters Lynne Witte of Luther and Gayle (Rev. Bob) Grimm of Alma, KS; 3 grandchildren Erik (Eve) Grimm, Elisabeth (Brandon) Heath and Aaron (Kayla) Grimm; great granddaughter Andrea Grimm; siblings and spouses Sue (Paul) Westbrook, Al (Sally) Bartley, Doug Gielow; many nieces, nephews and friends. He was preceded in death by his son, Mark, and several of his siblings and their spouses, Billy and Marge Bartley, AnnaBelle and Wade Grout, and Sally Gielow. Graveside Services will be held Tuesday, June 9, 2020 at Lexington Cemetery with Rev. Robert Grimm and Rev. Barry Sheldon officiating. Memorial Services will be held at a later date. Military Rites by the Croswell American Legion Post #255. Memorials may be made the St. Matthew Lutheran Church.

The family of Fred R. Bartley created this Life Tributes page to make it easy to share your memories.

Send flowers to the Bartley family.