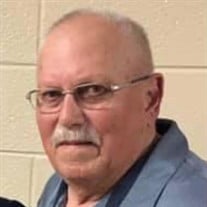 Frederick James Gageby, age 73, of Carsonville, passed away Monday, March 29, 2021 at McLaren Port Huron Hospital. He was born on June 8, 1947 in Sandusky, son of the late Frederick and Leona (Allen) Gageby. Fred married Cheryl Ryan on October 20, 1978 in Port Sanilac. He was a Veteran of the U.S. Army, serving 4 years. Fred worked at the Carsonville Elevator for many years before it was shut down, where he continued work at the CPS High School as a custodian. He was on the Carsonville Fire Dept. for 35 years. Fred enjoyed reading western novels, gardening, hunting, and attending his grandkids sporting events; his first priority was his children and grandchildren. Fred is survived by his loving wife, Cheryl; children, Tiffany (Brian) Moran of Port Sanilac, Eric (Erica) Gageby of Carsonville, and Gina (Lewis) Seward of Suffolk, VA; grandchildren, Tyler, Trenton, Gage, Zachary, Peyton, Cassidy, and Dylan; and great grandchild, Marlee. He was preceded in death by his brother-in-law, Donald Ryan. Funeral Services will be held 6 PM Friday, April 2 at the Pomeroy Funeral Home, Carsonville. Rev. Jerry Griggs will officiate. Friends may call from 1-6 PM Friday, prior to the service. Memorials may be made to the Carsonville Port Sanilac JV and Varsity Athletic Programs.

The family of Frederick J. Gageby created this Life Tributes page to make it easy to share your memories.

Send flowers to the Gageby family.