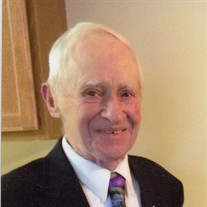 Carsonville- Gordon Bernard Messing, age 88, of Carsonville, passed away on Friday, January 17, 2020 at Autumnwood of Deckerville. Gordon was born on July 3, 1931 in Minden City, the son of the late Francis and Bernetta (Booms) Messing. He served in the end of the Korean War from 53-55. He married Julianna Essenmacher on April 27, 1957 in Helena. Farming was his profession, but health issues called for a change, with only an 8th grade education he acquired an associates degree at Coyne Electric School in Chicago and went on to get a job with Sears in Bay City, transferring later to Port Huron where he worked for 30 years. He practiced his Catholic faith at St. Marys Catholic Church in Port Sanilac, where he was Eucharistic minister, usher and supporter of the Right to Life movement of Sanilac County, he was also the Sexton of Old St. Marys Cemetery. Gordon is survived by two sons, Randolph J. (Jill) and David M., son in law Gary Dobrynski; five daughters, Barbara J. ((Richard) Koenig, Donna M. Joseph, Kathryn A. (Neil) Bitzer, Laura A. Scott and Sarah E. Messing; nineteen grandchildren and two great grandchildren; one brother, Daniel (Diane) Messing of Wisconsin and one sister, Elizabeth Outlaw of Garden City; one brother in law, Fred Roggenbuck. He was preceded in death by his wife, Julianna on January 1, 2020, his daughter, Alice Dobrynski, grandaughter, Veronica, great grandaughter, Avery, son in law, Michael P. Scott, two brothers, Norman Messing and Marcus (Bernice) Messing; four sisters, Mildred (Walter) Uhl, Sylvia Langdon and Arlene Roggenbuck and his infant sister, Alice; brother in law, Herb Outlaw. Visitation will be from 2-8 P.M. on Tuesday at the Pomeroy Funeral Home in Carsonville, with Rosary Devotions at 4 P.M . Funeral Mass will be held at 11 A.M. on Wednesday at the Ave Maria Parish- St. Marys Catholic Church in Port Sanilac, with visiting at the church from 10-11 A.M., Fr. Donald J. Eppenbrock will officiate. Interment with military rites provided by the Croswell American Legion will follow in the Old St. Marys Cemetery. Memorials in memory of Gordon may be made to the Michigan Right to Life Education Fund.

Carsonville- Gordon Bernard Messing, age 88, of Carsonville, passed away on Friday, January 17, 2020 at Autumnwood of Deckerville. Gordon was born on July 3, 1931 in Minden City, the son of the late Francis and Bernetta (Booms) Messing.... View Obituary & Service Information

The family of Gordon Bernard Messing created this Life Tributes page to make it easy to share your memories.

Send flowers to the Messing family.