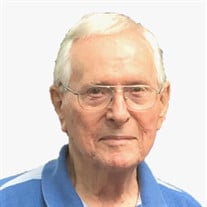 PORT SANILAC- Harold Clarence Swantek, age 93, passed away on July 28, 2020 at Marlette Hospice Residence in Marlette, MI. Harold was born in Hamtramck, MI on November 7, 1926, the third of six children, to Helen (Januchowski) and Bruno Swantek. He was drafted into the U.S. Army and served as crew chief of a fighter plane in its Air Force Division in 1945-1946 as part of the occupation forces in Japan at the end of World War II. Harold married Bonita (“Bonnie”) Bauer on October 14, 1950 at the Belle Isle Casino in Detroit. They spent many years traveling the US until daughter Maria was born in 1964. From 1974-1984 Harold spent his weekends building his retirement home in Port Sanilac from “scratch”. In 1984, after 36 years, he retired from the City of Detroit where he had worked as a graphic illustrator and the family moved to Port Sanilac. In retirement Harold served on the Sanilac Township Zoning Board, the Port Sanilac Cemetery Board and was a member of the Port Sanilac Lions Club for 25 years, always volunteering his artistic talents. He and Bonnie enjoyed “snowbirding” to Myrtle Beach, SC for years and more recently Harold would “go south” to an apartment at Mercy Village in Fort Gratiot, MI for the winter months. He is survived by his daughter, Maria (Peter) Fischer and grandchildren, Noah and Megan, all of Germany; also by a sister, Pat (Ron) Stempowski, and a brother Ralph (Pat) Swantek; plus many cousins, nieces, nephews and grand nieces and nephews. He was preceded in death by his parents, his wife Bonnie in 2017, two brothers and one sister. Visitation will be from 10A.M.- 2 P.M. on Monday, August 3 at the Pomeroy Funeral Home in Lexington. There will be a time for Sharing of Memories at 1:30 P.M. at the funeral home. Graveside Committal Services will be held at 2:30 P.M. at the Port Sanilac Cemetery with Military Honors provided by the Croswell American Legion. Memorial contributions to United Hospice Service of Marlette Regional Hospital would be greatly appreciated. The family requests that everyone wear a mask and practice social distancing. www.pomeroyfuneralhomes.com

The family of Harold C. Swantek created this Life Tributes page to make it easy to share your memories.

Send flowers to the Swantek family.