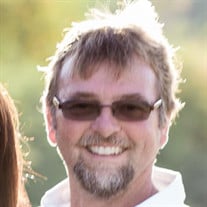 CROSWELL- Hugh S. Jamison, age 56, a resident of Croswell passed away on Monday, May 3, 2021 at the McLaren Port Huron Hospital, after a courageous battle with Covid 19. He was born on November 30, 1964 in Deckerville, a son of Keith and Charlotte (Doan) Jamison. Hugh married Kimberly K. Dennis on October 19, 1990 in Sandusky. She preceded him in death in a tragic car accident on December 27, 1999. Hugh owned and operated Maple Leaf Landscape and Nursery in Croswell, which he started in 1999 and has ran for the past 22 years. Hugh specialized in landscaping, lawn service and tree trimming. He was an avid hockey fan, especially the Toronto Maple Leafs, which he named his company after. He was also a member of the Croswell Masonic Lodge #469, F & A.M. Hugh was a hardworking, honest and devoted man, especially when it came to his family and his business. Hugh is survived by two sons, Michael (fiancee Kristen Sharpe) Jamison of Croswell and Matthew (Alexis) Jamison of Colorado; his father, Keith (Marie Doering) Jamison of Croswell; one brother, Daniel Jamison of Louisiana; one nephew, Nathan (Allie) Jamison; eight grandchildren; his wife, Shelly Williams of Peck and her two sons, Joshua (Chelsea) Williams of Peck and Jacob (Brooke) Williams of Peck. Hugh was preceded in death by his mother, Charlotte Jamison on January 3, 2013. Visitation will be 3-9 P.M. on Thursday at the Pomeroy Funeral Home in Croswell. Funeral services will be held at 2 P.M. on Friday at the funeral home, with visiting from 1-2. Rev. Julie Cramer of the Melvin Methodist Church will officiate. Interment will follow in the Croswell cemetery. Memorials in memory of Hugh may made to the family to establish a park or playground for children.

CROSWELL- Hugh S. Jamison, age 56, a resident of Croswell passed away on Monday, May 3, 2021 at the McLaren Port Huron Hospital, after a courageous battle with Covid 19. He was born on November 30, 1964 in Deckerville, a son of Keith and Charlotte... View Obituary & Service Information

The family of Hugh S. Jamison created this Life Tributes page to make it easy to share your memories.

Send flowers to the Jamison family.