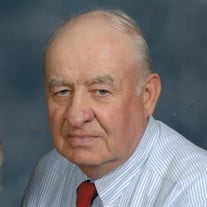 James Frederick “Fred” West, age 81, of Croswell, MI, passed away suddenly on Tuesday, October 2, 2018. He was born June 29, 1937 in Lexington to the late Martin E. and Francis G. (Welch) West. He graduated from Croswell-Lexington High School in 1955. He married Margaret Schweihofer, his loving partner at Saint Mary’s Catholic Church in Saint Clair, MI on July 6, 1963. Fred was a respected member of the community, proud to have built a successful family farming enterprise which was seeded from his early work in carpentry and employment with Aunt Janes. He loved his family above all else and was a talented dairy and cash crop farmer, builder, carpenter, gardener. He was a lifelong member and faithful contributor to the St. Patrick (Croswell) and Ava Maria (Lexington) Catholic parishes. He was a member of the Knights of Columbus (1980-2018), St. Patrick’s Ushers (Mens’) Club & Parish Council, Black River Area Antique Power Club, and of the Sanilac County Soil Conservation District of which he served as District Director from 1992-1995. He was named “Outstanding Conservation Farmer” of his district in 1985-1986. He is survived by his wife and siblings - Bernard West (Helen), Mary Quandt (Herb), and Donna Wurmlinger (Peter); eight children – Gary (Kris), Barbara Junga (Stephen), Becky, Robert (Shelly), Neal (Melissa), Amy Mee (Geoff), Colleen West-Schultz (Timothy), Eric (Katelyn); 18 grandchildren; 3 great grandchildren (2 expected great grandchildren). He was preceded in death by his parents and siblings – brothers- Edward, Leo, Charles and Richard; sisters- Sister Rose Margaret, Marian and Marie West, and Frances (Fred) Fletcher. Funeral Mass will be held at 11 A.M. on Monday at the Ave Maria Parish- St. Denis Church Catholic Church in Lexington. Fr. Donald Eppenbrock will officiate. Burial will be in Mt. Hope Cemetey in Croswell. Visiting will be held from 4-8 P.M. on Saturday and 12-7 P.M. on Sunday at the Pomeroy Funeral Home in Croswell and at the church from 10-11 A.M. Monday. Rosary Devotions will be held at 4 P.M. on Sunday afternoon at the funeral home.

The family of James Frederick West created this Life Tributes page to make it easy to share your memories.

Send flowers to the West family.