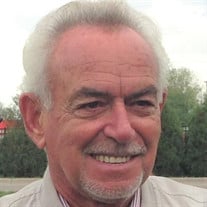 Gerald “Jerry” Weyeneth, 81, a resident of Croswell, passed away Saturday, October 13, with his loving wife at his side. He was born April 23, 1937, the son of the late Bruce & Vera (Morris) Weyeneth. Jerry proudly served his country in the US Navy. He married Marylin Adams on Sept. 17, 1960. He worked at Cadillac Motor for 10 years, then co-owned Adams Texaco Service Station for 32 years with family members Bob, Al, Don and Charlie. He was an active member of the Croswell Methodist Church, where he sang in the choir. He also sang for many weddings. He loved spending time with his family and friends. Every person he met he regarded as a friend. He enjoyed a variety of music, especially gospel, attending concerts, sports, and was an avid Pioneer fan. He also enjoyed dancing, tennis, playing cards, riding his motorcycle, basking in the sun, hot vanilla lattes and wintering in Arizona with his wife and their winter family/friends. He is survived by his loving wife Marylin of 58 years, son Lance Weyeneth & Cynthia Palleschi of St. Clair Shores, daughters: Launa Gunningham of Alabama, Wendy & Scott Cornwall, and Rene’ & Jim Cutler, both of Lexington. Grandchildren Ty & Mandi Gunningham, Shayna & Joe Marigold, Haley & Chad Klar, Zach & Courtney Cornwall, Dylan, Drew & Darren Scheid, and Jeffrey Makowski. Great Grandson, Chase Klar. Sisters-in-law: Cheryl, Kate, Arlene, Margarite and Mary Lou, many nieces, nephews, cousins and friends. He was preceded in death by his brother Harold Weyeneth. He will be remembered for his friendship to all and his big, warm hugs. Visitation will be held at Pomeroy Funeral Home in Croswell on Sunday, October 21 from 1-8 P.M. Memorial Services to honor the life of Jerry Weyeneth will be held at 11 A.M. on Monday, October 22 at the Croswell United Methodist Church, with visiting at the church from 10-11 A.M. on Monday. Rev. Nick Genoff will officiate. Memorials in memory of Jerry may be made to the Croswell United Methodist Church. Military Rites will be provided by the Croswell American Legion.

Gerald &#8220;Jerry&#8221; Weyeneth, 81, a resident of Croswell, passed away Saturday, October 13, with his loving wife at his side. He was born April 23, 1937, the son of the late Bruce & Vera (Morris) Weyeneth. Jerry proudly served his country... View Obituary & Service Information

The family of Jerry Weyeneth created this Life Tributes page to make it easy to share your memories.

Gerald “Jerry” Weyeneth, 81, a resident of Croswell, passed away...

Send flowers to the Weyeneth family.