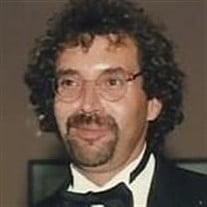 John Michael Hovanec, age 56, died December 10, 2017, one day before his 57th birthday, at McLaren Port Huron Hospital after a lengthy, brave battle with cancer. He was born December 11, 1960 in Royal Oak, son of Joseph P. and Audrey M. (Vicic) Hovanec. John was a Master Finish Carpenter. He took great pride in his work. John loved walking his Scottish Terriers Sidney and Sophie, who went to work with him. They were his constant companions. He is survived by his mother, Audrey of Croswell; 2 brothers, James (Nancy) and Paul, both of Croswell; 5 sisters, Martha (James) Pierce of Huber Heights, OH, Nancy Tanner of Croswell, Anne (Randy) Craig of Croswell, Audrey (Thomas) Martin of Marysville, and Amy (Jeffrey) Boswell of Orchard Park, NY; and many nieces and nephews. John was preceded in death by his father, Joseph, Sr., brother Joseph, Jr., and sister Mary Ann Brown. Visitation will be from 2-9 PM Friday and 10-11 AM Saturday at the funeral home. Funeral Services will be held 11 AM Saturday, December 16 at the Pomeroy Funeral Home, Croswell. Burial will be in Memory Lane Cemetery. Memorials may be made to the family for donation to his favorite charities.

The family of John Michael Hovanec created this Life Tributes page to make it easy to share your memories.

Send flowers to the Hovanec family.