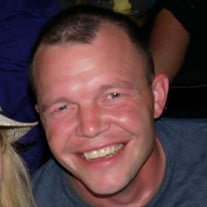 On Saturday, July 11, 2020, Joshua August Lundquist, died suddenly and unexpectedly at the age of 42. Joshua was born on November 10, 1977 in Ann Arbor, Michigan to Kevin and Linda Lundquist. He graduated from Ypsilanti High School in 1996 and enlisted in the military shortly thereafter. He married Katie Irene Pedersen on February 10, 2000 and they had two daughters, Alivia and Shelby. Joshua was a decorated United States Marine Corps Veteran who served our country during times of war and peace and retired honorably after 17 years of dedicated service. Joshua loved fishing and playing chess. He was most proud of his daughters and all their accomplishments and gave all the credit to his wife. He enjoyed working on cars and motorcycles and tinkering around in his garage. He was known for his compassionate and giving spirit. He was generous in every aspect of life, but especially with his time and knowledge. He was always willing to help with a home improvement project or with any of the many skills he had. He enjoyed deep discussions over coffee or beer. He had a quick wit and an unmatched sense of humor. He was spontaneous and when he had an idea his excitement was infectious. De-spite all his wonderful attributes, of late Joshua suffered from the insidious disease of PTSD and the mental ill-ness that comes with it. He found some level of comfort and peace at times but wasn't able to quiet the inner thoughts that created constant turmoil. This disease for him was one that medicines did not cure, doctors could not dispel, and all our affection and attention could not heal. Given the sad circumstance of his death, he did not want us to feel guilty or to question ourselves about what we could have done to help prevent his death. All of our love and concern could not produce a cure. Even though we may feel frustrated that our love could not do more to help him, may we find comfort in knowing that he rests in heaven in a peace and joy greater than any we could conceive on this earth. He is survived by his wife Katie and daughters Alivia and Shelby, his father Kevin and mother Linda (Pelky) Lundquist, his sisters Sarah (Douglas) Harger, Bethany (Nathan) Watson, Mother and Father in-law Lynn Roth and Dale Pedersen, his brothers in-law Ryan (Colleen) Pedersen and Steven Pedersen, and so many loving cousins, aunts, uncles, nephews, nieces, and brothers-in-arms. Joshua was preceded in death by his grandparents Donald Lundquist, Barbara and John Kapnas and Butch and Alice Post. Graveside Services will be held 2 PM Tuesday, July 28 at Port Sanilac Cemetery. Pastor Andrew Willis will officiate. Military Rites by the Croswell American Legion Post #255. Memorials may be made to his children's college fund or to help with funeral costs, c/o Katie Lundquist, 45287 Paseo Durango, Temecula, CA 92592.

On Saturday, July 11, 2020, Joshua August Lundquist, died suddenly and unexpectedly at the age of 42. Joshua was born on November 10, 1977 in Ann Arbor, Michigan to Kevin and Linda Lundquist. He graduated from Ypsilanti High School in 1996 and... View Obituary & Service Information

The family of Joshua August Lundquist created this Life Tributes page to make it easy to share your memories.

Send flowers to the Lundquist family.