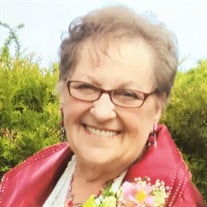 Juanita M. Kandler, age 74, died on Thursday, April 12, 2018 at Port Huron Maclaren Hospital with her family at her bedside. From her birth in Detroit, MI on February 27, 1944 to the day of her death, she was a cherished blessing to her family. Juanita, an immediate friend to all who crossed her path, treated everyone with unconditional love, kindness, and generosity. She was the first-born daughter to the late Harry and Anna Mae (Proctor) Durecka. Adored by her three older brothers and always doting on her younger brothers and sisters she became affectionately known as “Sissy” with the same name adopted by her many nieces and nephews who so lovingly referred to her as “Aunt Sis.” On October 12, 1963 she married the love of her life Carl Kandler at her parents’ home in Croswell. She is survived by Carl as well as her three children, Kirt (Sheri) Kandler of Lexington, Renae (David) Anderson of Lakeport and Jodie Kandler of Lexington; her two grandchildren Hannah (Tyler) Maxfield of Honolulu, and Jared Anderson of Lakeport; three brothers, Gordon (Brenda) Durecka, Orville (Nancy) Durecka of Croswell and Warren (Debbie) Durecka of Charlotte; three sisters, Mary Katherine Galbraith of Croswell, Tammy Durecka, and Laura Durecka both of Port Sanilac; two sisters-in-law, Wilma Durecka of Croswell and Sylvia Durecka of Kimball; and many nieces, nephews. She is preceded in death by two brothers, Harry Durecka and Duane Durecka and a sister, Linda Detary. Juanita demonstrated her many talents and love for beautiful things as she immersed herself in flower gardening, quilting, sewing, and cooking. She also loved interior decorating as was demonstrated in her 25 year career in Home Interiors and Gifts where she went on to be a branch manager in Michigan. However, her true passion was being with her family; she was a loving sister, a generous aunt, a doting wife, a nurturing mother and the best Nana imaginable. The funeral service will be held at 11:00 A.M. Monday April 16, 2018 at the Croswell Wesleyan Church. Pastor Phil Count will officiate. Burial will be in Mt. Hope Cemetery in Croswell. Visitation will be held 1 – 7 PM Sunday April 15 at the Pomeroy Funeral Home, Croswell, and 10-11 AM Monday at the church. The Kandler family would like to extend their gratitude to all the staff at the Regency on the Lake in Fort Gratiot for their attentiveness and loving care to Juanita for the last three years. Memorials may be made in Juanita’s name to Regency on the Lake Activities Department.

Juanita M. Kandler, age 74, died on Thursday, April 12, 2018 at Port Huron Maclaren Hospital with her family at her bedside. From her birth in Detroit, MI on February 27, 1944 to the day of her death, she was a cherished blessing to her family.... View Obituary & Service Information

The family of Juanita M. Kandler created this Life Tributes page to make it easy to share your memories.

Send flowers to the Kandler family.