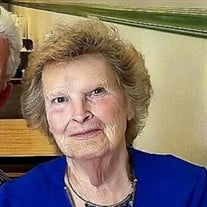 Laura Dugall Cohorst Maiden Name: Lauralee Cornell (Nee Boitnott, Dugall, Tupper) Laura Dugall Cohorst, age 81, of Port Sanilac, passed away on Monday, June 1, 2020, at home (in the house her father built) in the loving care of her family as were her wishes. She was born Oct. 3, 1938, in Detroit, Michigan, to Mary (Bates) and Albert Cornell, and was the oldest of four children. (She was very proud to be half Canadian.) She was preceded in death by her dear sister, Lois Vick, and brother, Richard Cornell, and is survived by brother, Albert Cornell. Laura spent her childhood on a farm in Washington, MI, and also lived in Detroit, Oak Park, Union Lake, Port Sanilac, and for the past 30 years enjoyed winters in Bushnell, FL at the Red Oaks Campground. Laura was the beloved wife of Larry Cohorst for almost 19 years. She was preceded in death by husbands Dean Boitnott and Richard Dugall, and ex-husband, Merle Tupper. She was a loving mother to five: Linda (Frank) Casenhiser, David (Diana) Dugall, Richard (Jeanette) Dugall, Deborah (Ernest) Oyer, and Joseph (Wendy) Dugall. She is also survived by two step children: Meichelle (Richard) Hoyt and Edward (Dale) Hartsfield. And was preceded in death by stepson Larry “Skip” (Sandy) Cohorst. Laura enjoyed her family, and leaves to cherish her memory 7 grandchildren: Sarah Casenhiser (Chris), Laura Kniffen, Daniel Kniffen, Susanna (Rob) Ray, Brandon Dugall, Kara (Max) Harman, and Connor Dugall. And, also her 6 step grandchildren: Haley Hoyt (Chase), Tyler Hoyt, Devon Cohorst, Daniel Cohorst, Kristopher Cohorst, Dustyn Cohorst. And one great grand stepdaughter: Abbi Wilson. And special cousins, Barbara Bates and Judy Pemas, and much loved niece, Sharon Gray, along with many other dear family and friends. She was a graduate of Walled Lake Adult Education, and retired after 25 years as a bus driver for Walled Lake Schools. Laura was a blessing to many people. As a child, she shared her lunches with a classmate who had none and told no one. (Her mother only discovered it after she became concerned about how much food she thought Laura was consuming!) She touched the lives of many… invited those who were facing a personal crisis to live with her (sometimes for years) while she helped them get back on track and at times provided much needed financial support. She noticed the kids (e.g. on her bus, in the scout troop, etc.) who were hungry for food or--more often-- attention and she lovingly provided it. She loved fiercely, but also could be quite outspoken. No one had to guess where they stood with Laura or why! Laura loved planning surprises and had a great sense of humor. She was a loving and proud mother and grandmother and her greatest joy was her family. She was responsible for many “magical moments and memories” from a home visit by the Easter Bunny to surprise graduation parties and Christmas gifts of ski weekends for her adult children and spouses. She was an outstanding cook/baker (specialties: homemade beef and noodles and Canadian butter tarts/desserts) and shared her best recipes with family in a “self-published” cookbook. Laura was a formidable competitor as a card player (Poker Queen, Bridge, Pinochle, Euchre, 13). She enjoyed reading and travel (11 cruises, trip to Germany, visits to Canada and most states including Alaska, Hawaii). Laura was a calculated risk taker and fought for her beliefs. She usually “won.” She always wanted to “fix” things – especially relationships – for her loved ones, and had a hard time when things were beyond her control. She knew how to make people feel special (cooked their favorite foods, took them places she knew they would like, encouraged them, etc.). Her idea of a great time was filling her house with family and friends and cooking them special meals followed by a bon fire or a card game. She was a former member of Commerce United Methodist Church, and also had been very active in Ala-non. She was a former hospice volunteer, and also helped the elderly whenever she saw a need. Even when she was aware she was dying, Laura declared herself “lucky” and exclaimed many times that she felt “so loved.” She was right – again! And she “won”! She will be missed; her life made a difference! Special thanks to the staff of Blue Water Hospice. Donations can be sent to this organization (2795 Edison Drive, Marysville, MI 48040). Condolences can be shared and a full obituary can be found at www.Pomeroyfuneralhomes.com. A Memorial Service will be held 11 AM Saturday, October 2, 2021 at Commerce United Methodist Church, 1155 N. Commerce Rd., Commerce Twp., MI 48382. Visitation will be held from 10-11 AM prior to the service. Inurnment will take place at Commerce Curtis Cemetery.

The family of Laura Dugall Cohorst created this Life Tributes page to make it easy to share your memories.

Send flowers to the Cohorst family.