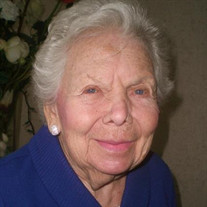 CARSONVILLE: Lydia Priehs, age 92, passed away Sunday, July 30, 2017 in Madison, WI. She was born June 11, 1925 in Russo, North Dakota, the eleventh child of Roman and Tatiana Baklenko. She married Dick Priehs in 1954 in Detroit, Michigan. They moved to Carsonville with their two children in 1970. After Dick’s death, she moved to Port Sanilac, and most recently moved to Madison, WI in 2013. Lydia was raised on the family farm in North Dakota. She graduated from Velva High School. Although she never attended college, for a time she was a teacher in a one-room schoolhouse. After WWII, she followed several of her sisters to Detroit and worked as a secretary in the auto industry. The four youngest sisters loved to sing and formed a group who performed with the USO. After getting married, Lydia left her career to raise her family, but later returned to the workforce at Numatics in Sandusky, MI until her retirement. Lydia enjoyed being around people, loved to garden, and was rarely without a fresh bouquet of flowers in her home. She also continued to sing and would occasionally play the harmonica. She was a kind-hearted person with a great capacity for forgiveness and was unfailingly dedicated to family. Lydia is survived by 1 son, Grant (Alan) of Madison, WI, 1 sister, Fran Amyuni of Sterling Heights, MI, 2 grandchildren, Roman and Sienna, and many nieces and nephews scattered across the country. She was preceded in death by her husband, Dick (1999) and her daughter Laurel Bombyk (2013). Visitation will be held 11am - 3pm on Saturday, August 5th at Pomeroy Funeral Home in Carsonville, immediately followed by a service at 3pm. Rev. Barry Sheldon will officiate. Burial at St. John Lutheran Cemetery. Memorials may be made to St. John Lutheran Church in Port Sanilac.

The family of Lydia Priehs created this Life Tributes page to make it easy to share your memories.

Send flowers to the Priehs family.