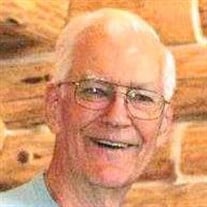 Lynn C. Benner age 82, of Carsonville, formerly of Berkley, died Sunday May 26, 2019 at his home. He was born September 15, 1936 in Edmore, MI to the late Aaron Edward and Alice Hazel (Aldrich) Benner. Lynn served in the United States Air Force from 1955 to 1959. His most memorable time in the service was when he served at a remote radar site in Alaska. He spent all of his off time exploring, hunting and fishing. On April 19, 1958 he married Merlene Lou Kellogg at St. John’s Episcopal Church in Royal Oak, MI. After he completed his military service, they settled in Berkley and then lived in Big Rapids, MI from 1971-1973 while he pursued a degree in Industrial Electronics at Ferris State University. After returning to Berkley, he worked for MTS systems and Defiance Testing and Engineering as Service Manager until he retired in 1999. Much time was spent fishing in Owen Sound, Ontario and the waters of Lake Huron along the Thumb which led to them moving to Sanilac Township in 2003. He will be much remembered as an avid hunter and fisherman and for his story telling and sense of humor. Lynn is survived by his wife of 61 years, Merlene; three sons Lewis Cory Benner of Carson City, MI, Aaron Douglas (Debra) Benner of Gladewater, TX, and David Brian (Ann) Benner of Berkley, MI; six granddaughters Jessica Riggs, Amanda (Joey) Wightman, Angelica (Adam) Vinton, Lindsay Benner, Fiona Benner and Anya Benner; seven great-grandchildren Luke Riggs, Riley Riggs, Anne-Marie Vinson, Madden Vinson, Chad Wightman, ReAnna Vinton, and Nora Vinton; his brother Bob Otis Benner of Flint. He was preceded in death by his parents; one brother Richard G. Vollmer (Frank Benner); and one sister Lucille Howard. Lynn’s ashes will be interred at 1 P.M. on Thursday, July 11, 2019 at the Great lakes National Cemetery in holly, Michigan. Family and friends will gather at the family home to celebrate his life on July 13, 2019 Memorials can be sent to St. Jude’s Children’s Research Hospital. Stjude.org Arrangements by Pomeroy Funeral Home Carsonville.

The family of Lynn C. Benner created this Life Tributes page to make it easy to share your memories.

Send flowers to the Benner family.