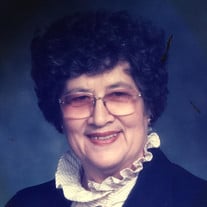 LEXINGTON: Maria J. Beyer, age 95, passed away Monday, October 9, 2017 at McLaren Port Huron Hospital. She was born June 25, 1922 in Hermannstadt, Romania, daughter of the late Johan and Maria (Fruhn) Koenig. Maria immigrated in 1955 to the U.S. from war ravaged Europe. She was fluent in 5 languages. Maria worked in Grosse Pointe as a governess. She settled in Detroit, where she met and married Rolf S. Beyer, including step-children Brigitte, Edith, Hans, Renate, and Doris. In 1961, a son, Rich Beyer, joined the family. In the mid 1970’s, they moved to Lexington, and she remained an active member of the community she loved. She is survived by her son Richard (Ann) Beyer of Westlake, OH; and grandchildren, Erich, Renata, and Christa Beyer; sister, Marta Schmidt of Germany; and her step-children. Maria was preceded in death by her brother, Richard Koenig, and step-daughter Edith. Memorial Services will be held 11 AM Thursday, October 12 at the Pomeroy Funeral Home, Lexington. Rich Cochrill will officiate. Memorials are suggested to the American Cancer Soceity.

The family of Maria J. Beyer created this Life Tributes page to make it easy to share your memories.

Send flowers to the Beyer family.