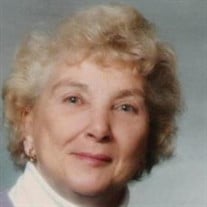 PORT SANILAC- Mary Louise Iris Bedard passed away peacefully on March 9, 2022, in Port Sanilac, Michigan. She lived for decades in the Detroit area and Port Sanilac, Michigan. She was born March 1, 1931, at Detroit’s East Side General Hospital and graduated from Dominican High School. Mary Louise had attended Marygrove College for just one day when her father died, setting her on a life dedicated to six generations of her family. She always had a soft spot for children and dogs. With college no longer possible, Mary Lou began doing general office work for the East Side Shopper, for Sanders and a loan company on Mack Avenue. With the death of her brother, a former paratrooper, Mary Lou looked after her mother. Mary Lou met Robert J. Bedard, a former Marine and an Arthur Murray dance instructor at a Catholic singles club. They married June 20, 1953, at St. Martin’s Church in Detroit. A daughter, Debra Ann, arrived in 1954, and a son, Michael Robert, came in 1961. Mary Lou’s mother, Eleanor Fournier, remained with their family for 37 years. As her husband pursued fundraising for the University of Detroit, Loyola University’s medical center and Mt. Carmel Mercy Hospital, their calendar filled with benefits and galas. While he was at the center of crowds making connections, she would find people who seemed to be on the outskirts, engaging them in conversation. The family moved from St. Mary’s of Redford parish in Detroit to Beverly Hills, and then to the Chicago area for two years, and back to Bloomfield Township. Free weekends, especially in summer, were spent building a family compound on a piece of land her grandfather had bought just north of Port Sanilac. In the early 1970s, with their children becoming independent, a friend’s plea to fill an emergency job called Mary Lou back into the paid workforce. Although she had just one day of college for herself, she spent the next 25 years helping students navigate student health services at Oakland Community College’s Royal Oak campus. Upon retirement, Mary Lou and Bob moved to Post Sanilac full time, surrounding themselves with children, grandchildren, their great-grandson and the “puppy dogs.” Mary Lou is survived by her husband, Robert, their daughter Debra and her husband, Joe Grimm; their son Mike and his wife, Susan Bevis; three grandchildren: Daniel Grimm and his wife, Michele Lee and their son, James Robert; Steven Grimm and his wife, Madeleine King, and Kelly Bedard. Visitation will be March 18 at St. Mary Catholic Church, 7066 Main St., Port Sanilac, Michigan, at 10 A.M. with an 11 A.M. Funeral Mass. Fr. Donald J. Eppenbrock will officate. Interment will be in the All Saints Catholic Cemetery in Waterford. Memorials in memory of Mary may be made to Shades of Pink or Leader Dogs for the Blind.

The family of Mary Louise Iris Bedard created this Life Tributes page to make it easy to share your memories.

Send flowers to the Bedard family.