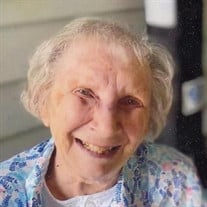 Mary C. Brown, age 94, of Lexington, passed away on Tuesday, July 20, 2021 in her home. She was born July 15, 1927 in Detroit, daughter of the late Norton and Jean (Matthews) Phillips. Mary married Kenneth J. Brown on December 27, 1957 in San Francisco. He preceded her in death June 4, 1968. Mary graduated high school in Detroit, and then graduated college at Michigan State University. She began teaching in Lansing, followed by Muskegon. She then taught in Hawaii for a few years, and followed that with a teaching stop in Mexico, which is where she met her husband. Mary returned to Lexington, where she taught first, second, and third grade at Meyer Elementary for the remainder of her career. She retired in 1987 and enjoyed traveling to places like Europe, Africa, and many places around the United States. Mary also belonged to the knitting group, birders, and Garden Club. She enjoyed going to dinner with friends. She is survived by her son Phil; daughter, Carolyn (Herman) Senders; and granddaughter, Morganne Senders. Mary was preceded in death by her sister and brother in law, Jean and Ernie Jackson. A Memorial Service will take place 11 AM Saturday, July 24 at Pomeroy Funeral Home Croswell. Inurnment will take place at Croswell Cemetery. Visitation will be from 10-11 prior to the service. Memorials may be made to the Lexington Fire Dept.

The family of Mary C. Brown created this Life Tributes page to make it easy to share your memories.

Send flowers to the Brown family.