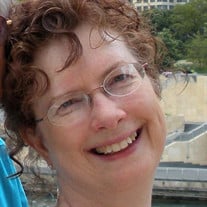 CROSWELL- Mary Ellen C. Mageski, 67, of Croswell, Michigan died March 4, 2018 at the Henry Ford Hospital in Detroit. She was born on January 28, 1951 in Detroit, Michigan the daughter of James C. and Signe (Nelson) Cameron. She grew up in Manistque, Michigan, and was a graduate of Central Michigan University. Mary Ellen met her husband, Harold “Harry”, at CMU. They married on July 20, 1974 at Zion Lutheran Church in Manistque. They made their home in Croswell, and were both public school educators. She was the librarian at Peck Community Schools for 35 years. Upon retirement,she enjoyed working part-time at the Aitken Memorial Library in Croswell. An avid reader, she often read two books a day. Mary Ellen was an excellent seamstress, having made several dresses for others in her wedding party, her own wedding dress, and her daughter’s wedding dress. She assisted with wardrobe for many years for Cros-Lex Middle School plays after her children graduated. She loved traveling with her husband and friends, both throughout the United States and in foreign countries. She especially loved Civil War sites, and traveling Route 66 on several occasions. She was a member of the Trinity Lutheran Church in Brown City, and sang in the choir there. Hobbies included; traveling, spending time at Gulliver Lake in the Upper Penninsula of Michigan, and most importantly spending time with her family and friends. Mary Ellen is survived by her husband, Harold “Harry” Mageski of Croswell; son, Carl Mageski of Ypsilanti; daughter, Emily, son in law Andrew and grandaughter, Ivy Papa of Farmington; brother, James; sister in law Jil, and nephew, Dan Cameron of Whitehall; along with several brother in laws, sister in laws, cousins, nieces and nephews. She was preceded in death by her father, James Carlton Cameron; an infant daughter, Karen Margaret Mageski; her aunt, Margaret (Nelson) Larsen and her mother, Signe (Nelson) Cameron. A celebration of Mary Ellen’s life will be held at the Trinity Lutheran Church in Brown City on Saturday, March 31, 2018. Visitation with the family will begin at 10 A.M. with services to begin at 11 A.M. In lieu of flowers, memorial donations may be made to the Brown City Food Bank, Trinity Lutheran Church Endowment Fund, or the Aitken Memorial Library in Croswell.

CROSWELL- Mary Ellen C. Mageski, 67, of Croswell, Michigan died March 4, 2018 at the Henry Ford Hospital in Detroit. She was born on January 28, 1951 in Detroit, Michigan the daughter of James C. and Signe (Nelson) Cameron. She grew up... View Obituary & Service Information

The family of Mary Ellen Mageski created this Life Tributes page to make it easy to share your memories.

Send flowers to the Mageski family.