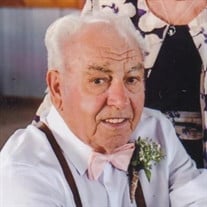 Max Edward Lamb, age 89, of Jeddo, passed away on Thursday, May 12, 2022 at Water Wheel A.F.C in Jeddo. Max was born January 22, 1933 in Port Huron, son of the late Earl E. and Faye (Campbell) Lamb. He married Phyllis Bussey on April 19, 1958 in Port Huron. He was a Veteran of the U.S. Army, serving in the Korean War. Max owned Lamb Dairy Farm. He was a member of the Croswell American Legion Post #255, MMPA, VFW Port Huron and the Grant Twp. Fire Dept.. Max enjoyed stock car racing, snowmobiling, and spending time with his family. He is survived by his wife, Phyllis of Jeddo; son, Scott (Kristie) of Jeddo; daughter, Terri (Todd) Burch of Jeddo; 6 grandchildren, Amber (Matt), Brennan (Alexa), Wyatt, Madyson, Lane, and Savannah; 2 great grandchildren, Blaine and Wade; and sister, Shirley Clark of Lexington; sisters in law Sue Lamb, Beverly Jurzysta and brother in law Bob Lester and many nieces and nephews. He was preceded in death by his brother, Don, and sisters, Donna Lester and Cora Lee Gordon; brothers in law Les Clark, Bob Gordon and Dick Bussey. Funeral Services will be held 11 AM Tuesday, May 17 at the Pomeroy Funeral Home in Croswell. The Rev. Donald R. Derby will officiate. Burial will be in the Croswell Cemetery with Military Rites by Croswell American Legion Post #255. Visitation will be 2-8 PM Monday and 10-11 AM Tuesday at the funeral home. Memorials are suggested to the Jeddo United Methodist Church.

The family of Max E. Lamb created this Life Tributes page to make it easy to share your memories.

Send flowers to the Lamb family.