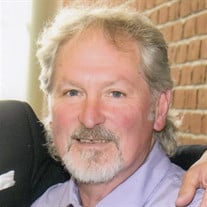 Michael (Mike) Joseph Green, age 63, of Burtchville passed away Tuesday, April 17, 2018 after a brave battle with cancer. He was surrounded by his family and went in peace. He was born September 24, 1954 in Sandusky, MI, son of the late Maxwelton and Jean (Shanks) Green. Mike married Dawn Hopkins on December 23, 2015. Together, they enjoyed spending time with family and loved ones. They met friends and regularly socialized at Tally Ho. They were also in the process of opening Hobo Joe’s Bakery and Sandwich Shop in Lakeport, MI. With Dawn by his side, Mike became the best version of himself. Mike is best described as a jack of all trades. He ran Mike’s Handyman Service where he always went above and beyond providing excellent service and making new friends with everyone he encountered. He rarely came across a task that he couldn’t complete. He was hard-working and was always on the go. He was also a small business owner, previously owned and operated Pioneer Bakery in Croswell and was looking forward to opening his bakery (Hobo Joe’s) in Lakeport. He enjoyed riding his motorcycle, a true Harley Davidson enthusiast. He loved cooking and sharing his new recipes for family and friends to taste. He liked fishing and enjoyed being near the lake. Mike lived, and I mean he really lived - life to its fullest. He never put on airs, he was always true to himself. He left us too soon but he made sure the time he spent with us left an imprint that will outlast time. Mike is survived by his loving wife, Dawn; his loving “Little Mamas”, Daisy; sons, Brandon Green (Heather Bearden), Randy (Heather) Green, Jesse (Shia) Green, and Ben Green (Alicia Krumenaker); daughter, Brettany Kensley; 11 grandchildren; Autumn, Cassandra, Dakota, Devon, Jayden, Trevor, Tessah, Jake, Charlie, Lexi and a granddaughter on the way to be named Olivia; brother, Dale Green; sister, Valene (Earl) Wagester; and sister-in-law, Mary Green. He was preceded in death by his daughter Jody, in 1976; brothers Bill and Richard Green; and Bill’s wife, Brenda Green. Memorial Services will be held Saturday, April 28, 2018 from 11am to 2pm at the Tally Ho Bar & Grill located at 7933 Lakeshore Rd, North Lakeport, MI 48059.

Michael (Mike) Joseph Green, age 63, of Burtchville passed away Tuesday, April 17, 2018 after a brave battle with cancer. He was surrounded by his family and went in peace. He was born September 24, 1954 in Sandusky, MI, son of the late Maxwelton... View Obituary & Service Information

The family of Michael J. Green created this Life Tributes page to make it easy to share your memories.

Send flowers to the Green family.