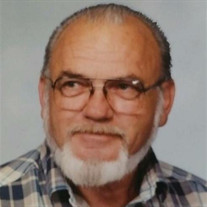 Orran F. Chadwick, age 79, resident of Croswell, passed away Tuesday, January 1, 2019 at McLaren Port Huron Hospital. He was born May 16, 1939 in St. Louis Co., MO, son of the late Orran G. and Grace V. (Hall) Chadwick. Orran married Donna J. Joiner on May 29, 1982 in Sandusky. She preceded him in death January 7, 2012. Orran was a Veteran of the U.S. Army. He is survived by his 5 daughters, Tammy Headstrand, Roberta (David) Lerch, Rebecca (David) Kane, Donna Hazzard, and Ravena (Philip) Hoffman; 2 sons, Bert Joiner, and Brett (Melina) Joiner; one brother Melvin, one sister, Ann; and many beloved grandchildren, and great grandchildren. Orran was preceded in death by his son, Donald, a daughter, Christine, and 2 brothers. No Services are planned at this time.

The family of Orran F. Chadwick created this Life Tributes page to make it easy to share your memories.

Send flowers to the Chadwick family.