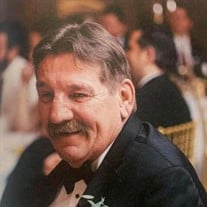 Orville A. Durecka, 68, of Croswell passed away suddenly on Thursday, October 29, 2020. Orville was born on October 15, 1952 in Croswell to late Harry and Anna Mae Durecka. Orville leaves behind his wife of 45 years, Nancy Durecka and children, Rodney (Christine) Durecka, Richard (Diamond) Durecka, Rhonda (Glen) Mugridge, Robin (Steve) Moody, Randy (Claire) Durecka, Rochelle (Steve) Lyons, Ben (Kim) Parraghi, and 12 grandchildren; siblings, Gordon (Brenda) Durecka, Kathy Galbraith, Warren (Debbie) Durecka, Tammy Durecka and Laurie Durecka; sister in law, Wilma Durecka and brother in law, Carl Kandler; several nieces and nephews and many cousins. He was preceded in death by siblings Duane Durecka, Harry (Sylvia) Durecka, Juanita Kandler, and Linda (Jerry) Detary and a brother in law, Gary Galbraith. Orville enjoyed spending time with his children, grandchildren, and wife and would offer a helping hand to anyone in need. He was a master diesel mechanic and semi-driver for most of his life and enjoyed spending time in the garage. He was also a classic car enthusiast and spent his free time taking his pride and joy, his 1971 Plymouth Duster, to car shows and cruises. Throughout his life, Orville loved watching his children and grandchildren play Pioneer Football and was a Michigan fan, through and through. Orville was also well known for his sarcastic sense of humor and was always finding ways to keep his family on their toes. Orville’s life was a true testament of what it means to be a hard working family man. His impact on those around him was significant, his love for his family was evident in all of his actions, and he will be deeply missed. Visitation for the public will be 2-8 P.M. Monday at the Pomeroy Funeral Home in Croswell. A private funeral service for immediate family only was held on Friday at the funeral home. Rev. Linda Fuller of the Croswell Untied Methodist Church officiated. Interment followed in the Croswell Cemetery.

Orville A. Durecka, 68, of Croswell passed away suddenly on Thursday, October 29, 2020. Orville was born on October 15, 1952 in Croswell to late Harry and Anna Mae Durecka. Orville leaves behind his wife of 45 years, Nancy Durecka and children,... View Obituary & Service Information

The family of Orville A. Durecka created this Life Tributes page to make it easy to share your memories.

Orville A. Durecka, 68, of Croswell passed away suddenly on Thursday,...

Send flowers to the Durecka family.