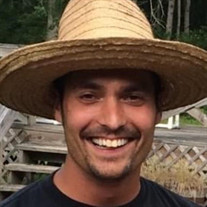 Paul M. Taylor, age 39, of Carsonville, passed away unexpectedly on Saturday, May 15, 2021 at Grand Strand Medical Center in South Carolina. Paul was born on June 10, 1981 in Warren, MI son of Dennis Taylor and Donna Hurn. Paul graduated from Carsonville-Port Sanilac High School in the Class of 1999. Paul went on to pursue a career at US Manufacturing now known as Dana. He started out as a operator and worked his way up to become a Senior Weld Engineer. Paul was an employee for 20 years. Paul was a family man. In his free time he loved spending time with his grandchildren. Family was everything to Paul, he was the life of every family event with his contagious smile. Paul also enjoyed spending time at the family property, riding his motorcycle (Christine), golfing, boating and working on anything mechanical. Paul is survived by one son, Xavier Taylor; 2 daughters, Natasha (Santos) Kandell, and Alexus Taylor; father, Dennis (Michelle) Taylor; 5 grandchildren, Aadin, Preston, Adrianna, Jaxtyn, and Deklyn; 3 brothers, Carl (Nikki) Taylor, Justin Taylor, and Eric (Jaimie) Taylor, one sister, Shannon (Chris) Peeling; step-brother, Dylan, and step-sister, Kasaundra; as well as many aunts, uncles, nieces, nephews, and cousins. Paul was preceded in death by his mother, Donna Hurn. Visitation will be from 12-7 P.M. on Sunday at the Pomeroy Funeral Home in Carsonville. Funeral Services will be held 11 A.M. on Monday at the funeral home, with visiting from 10-11. Burial will be in the Washington Cemetery.

The family of Paul M. Taylor created this Life Tributes page to make it easy to share your memories.

Send flowers to the Taylor family.