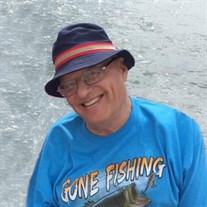 CROSWELL- Paul Lewis Wise, Jr. , age 71, a resident of Croswell passed away very unexpectedly at the McKenzie Memorial Hospital in Sandusky on Wednesday, October 27, 2021. He was born on April 12, 1950 in Detroit, Michigan,a son of the late Paul Lewis and Helen (Webb) Wise, Sr. Paul married Paulette J. Zimba on December 23, 1971 in East Detroit. Paul held a degree in Journalism and for many years worked at the local Jeffersonian and Sanilac County News newspapers and taught a few years at SC4. He was an avid member of the Croswell Lions Club and also served as president for several years. He enjoyed to go fishing even though more time was spent untangling his line, loved to read history books in particular anything on the Civil War and could strike up a conservation with anyone getting to know them personally. He was known to many as Grandpa Pooh or simply Pooh. Paul is survived by his wife Paulette Wise of Croswell, three daughters Tricia (Dave) Miller of Croswell, Tammy (Jason) Claydon of Falconer, NY., and Tiffany (Nate) Whitney of Wyoming, MI; eight grandchildren Chelcie Barr, Kayla Morrison, Amanda Barr, Cory Miller, Austin Barr, Paul James Claydon, Collin Claydon and Mia Claydon and grand dog, Reese; one sister, Regina (Ken) Edit of Warren. A Celebration of Life Service will be held at 11 A.M. on Monday, November 1, 2021 at the Croswell Lions Club in Croswell. Rev. Linda Fuller of the Croswell United Methodist Church will officiate. Memorials in memory of Paul may be made to the Croswell Lions Club. Arrangements were by the Pomeroy Funeral Home in Croswell.

CROSWELL- Paul Lewis Wise, Jr. , age 71, a resident of Croswell passed away very unexpectedly at the McKenzie Memorial Hospital in Sandusky on Wednesday, October 27, 2021. He was born on April 12, 1950 in Detroit, Michigan,a son of the late... View Obituary & Service Information

The family of Paul Lewis Wise Jr. created this Life Tributes page to make it easy to share your memories.

Send flowers to the Wise family.