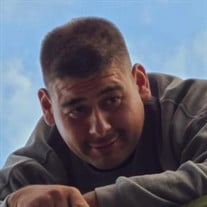 Pedro A. Solis, Jr., known as “Tony”, was born July 18, 1983 and died July 7, 2021. He was born to his father Pedro A. Solis, Sr. and raised by grandparents, the late Julio G. Solis, Sr. and Julia H. Solis. Tony is survived by his father, Pedro Solis, Sr., grandmother, Julia H. Solis, his beloved aunts, Leonarda (Francisco) Puebla, Ester Solis, Isabelle H. Solis; uncle, Francisco Solis; also survived by his loving brother, Joseph (Leah) Solis, and siblings, Josh, Gabriel, Crystal, and Amber; cousins that he loved like siblings, Adriana Ana Escobedo, Francisco Puebla, Mario Solis, Nicolas Puebla, Miguel Puebla, Jessica Castillo, and Blake Solis; and former uncle, Jesus Escobedo. He was preceded in death by his uncle Julio H. Solis, Jr. and his beloved grandfather from who he learned his strong work ethic, and cousin Sara S. Puebla. Tony was a gentle giant with a heart just as big. He was quick to laugh and slow to anger, and always willing to lend a helping hand. Tony will be greatly missed by his loving family that will forever feel the pain of his loss. There are many friends who are mourning his loss as well, Steve Soper, who he considered a friend and a mentor, Chuck VanEenoo, who he considered a brother, also Domink Zarillo, Gail Lockwood, and Cathy O’Connor. He truly was a man of great strength and honor, one of a kind, and the mold has been broken. Tony was the pride of our family, the first son, grandson, nephew, brother, and cousin. He was a great example to those that followed and often took them under his wings. Tony loved to hunt in deer season, and he loved his Chevy trucks, of which he constantly washed. He has left a devastated family and community and will never be forgotten. Tony was a member of Ave Maria Parish and former St. Patrick Catholic Church, where he received Holy Sacraments. Funeral Services will be held 11 AM Monday, July 12 at St. Denis Catholic Church, Lexington. Fr. Donald J. Eppenbrock will officiate. Burial will be in Mt. Hope Cemetery in Croswell. Visitation will be 1-7 PM Sunday at the Pomeroy Funeral Home, Croswell, and 10-11 AM Monday at church.

The family of Pedro A. "Tony" Solis Jr. created this Life Tributes page to make it easy to share your memories.

Send flowers to the Solis family.