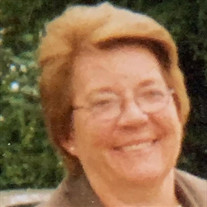 Not sure what to send?

CARSONVILLE- Mrs. Peggy Lee Carpenter-Mogan, age 77 of Carsonville, passed away on March 5, 2022. Mrs. Carpenter was a native of Detroit, MI and had made her home in Port Sanilac, MI he moved to Carsonville, MI and spent time in Milledgeville, GA during the winter. She was the daughter of the late William B. Mogan and Margaret Louise Nelson Mogan. Peggy was a resident of Port Sanilac,MI for thirty-two years and during her time there, volunteered for many parts of the community. She was a den mother for the cub scouts for eleven years, the village clerk who also worked on the election board for eight years and also volunteered with the Port Sanilac Fire Department auxiliary group called the “flammettes”. She was an active member of the United Methodist Church of Port Sanilac. Peggy enjoyed reading books from the local library along with learning all there was about freighters and lighthouses. She traveled across the United States with her husband Bill and enjoyed being a mother and grandmother to her family. Survivors include her husband William E. Carpenter, sons, William E. ( Morrisa) Carpenter, Jr of Oak Harbor, WA,, David K. (Francine) Carpenter of Holly, MI, and James A. (Monique) Carpenter of Gray, GA; sisters, Lois Trott of Dryden, MI and Judy Baker of Washington, PA; brother Frank Diane) Mogan of Utica, MI; grandchildren, Ryan Huston, Heather Sweet, April Visser, Ryan Zander, David Carpenter, Claire Brokenshaw, Jessica Slate, Charles Carpenter and Liahna Carpenter; great grandchildren, Sophie Slate, Elara Carpenter, Isla Brokenshaw, Brooklyn Sweet, Hunter Sweet, Graclyn Sweet, Wyatt Sweet, Tyler Huston, Alivia Huston and Ava Visser. A Memorial Service will be held 9 AM Saturday, July 30 at the Port Sanilac Methodist Church. Rev. Anika Bailey will officiate. Inurnment will take place at Port Sanilac Cemetery.

CARSONVILLE- Mrs. Peggy Lee Carpenter-Mogan, age 77 of Carsonville, passed away on March 5, 2022. Mrs. Carpenter was a native of Detroit, MI and had made her home in Port Sanilac, MI he moved to Carsonville, MI and... View Obituary & Service Information

The family of Peggy Lee Mogan-Carpenter created this Life Tributes page to make it easy to share your memories.