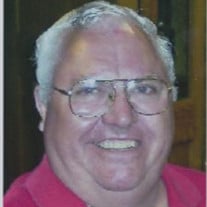 Lexington- Peter Joseph Kautz, age 79, passed away of natural causes on Tuesday, April 30, 2019. Born in Croswell, Michigan on February 20, 1940 he lived in the area his entire life. Peter was drafted in 1963 serving two years in the armed forces. He co-owned the Lexington Shell station with his brother John for 21 years, repairing and towing cars, plowing snow in the winter, pumping gas and putting a smile on the customer’s face every day. Peter was also a volunteer fireman on the Lexington Fire Department for over 20 years. In 1980 Peter and his wife Chris started a new chapter in their life and purchased the local bowling alley, currently known as Kautz Shore Lanes, which they renovated, expanded and made many changes to during the last 39 years. They purchased their second bowling alley in Brown City Michigan, which Peter renovated and operated for 16 years. Peter was a member of the Mid-Thumb Bowling Association, Bowling Proprietors Association and the Eagles organization. He loved to tinker and repair everything from old tractors to bowling machines. When his wife started CK Corral he helped cut and bail the hay for the animals, drive tractor for the fundraiser and clearing paths in the woods between the bowling alley and the farm. In the evenings he could be found sitting on the corner barstool watching over the bowling alley while he enjoyed a drink with friends at the bar. Peter believed in helping people have a good time and doing things the right way. Friends, family and the community will miss him. Peter is survived by his wife, Chris Kautz, brother Nick Kautz, son, Fred Kautz, daughter, Martha (Mike) Horak, grandchildren, Tori Kautz, Megan Horak and Mitch Horak, many nieces, nephews and cousins as well as his extended family, Dale Swoffer, Joey Fretenborough and Mindi (Travis) Woolman. A Celebration of Life ceremony is scheduled for Saturday, May 18, 2019 from 1 -4 P.M. at Kautz Shore Lanes. Donations will go towards CK Corral Animal Rescue.

Lexington- Peter Joseph Kautz, age 79, passed away of natural causes on Tuesday, April 30, 2019. Born in Croswell, Michigan on February 20, 1940 he lived in the area his entire life. Peter was drafted in 1963 serving two years in the armed... View Obituary & Service Information

The family of Peter Joseph Kautz created this Life Tributes page to make it easy to share your memories.

Send flowers to the Kautz family.