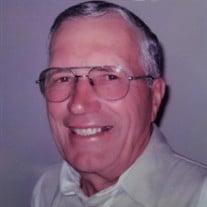 CROSWELL- Peter Michael Wurmlinger, age 89, a resident of Croswell passed away on Wednesday, March 2, 2022. He was born on March 10, 1932 in Croswell a son of the late Peter M. and Magdalena “Minnie” (Repp) Wurmlinger. Peter graduated from Cros-Lex High School in 1950, bought a milk can route which he ran until he was drafted into the Korean War in 1952. He proudly served his country as a lineman in the U.S. Army. After coming home he worked at Aunt Jane’s Pickle Co. On May 7, 1955 he married Donna Marie West at the St. Denis Catholic Church in Lexington. In 1960 Pete bought the family farm, he was a great dairy and crop farmer with his wife, Donna and brother, Don (Joanne). While farming he worked campaign season at the Michigan Sugar Co. for two years. He was very helpful to the community by setting on the Board of Review and Zoning Board for Buel Township. He loved spending time with his children, traveling and polka dancing. He is survived by his beloved wife of 66 years, Donna M. Wurmlinger; one daughter, Karen Wurmlinger (Bill Wolfson), two sons, Denis (Christine) Wurmlinger and Stephen (Nancy) Wurmlinger; son-in-law, Tom Irving; ten grandchildren, Jason (Lisa) Irving, Michael, Michelle and Jordan Wurmlinger, Heather (Andy) Rush, Chad, Corey (Casey) Wurmlinger; four great grandsons, Joshua and Tyler Irving, Liam Wurmlinger and Noah Rush; brother, Donald (Joanne) Wurmlinger; sister, Dianne (Rick) Wegner; brother-in-law, Leo Harland. Pete was preceded in death by his loving daughter, Ruth Ann Irving; brother and sister-in-law, Carl and Barbara Wurmlinger and his sister, Elaine Harland. Graveside Services with inurnment will be held at 11 A.M. on Saturday, March 12, 2022 at the Mt. Hope Catholic Cemetery in Croswell. Mr. Eric Wurmlinger will officiate. Military Honors will be provided by the Croswell American Legion. Memorials in memory of Pete may be made to the Alzheimers Association or the American Heart Association

The family of Peter Michael Wurmlinger created this Life Tributes page to make it easy to share your memories.

Send flowers to the Wurmlinger family.