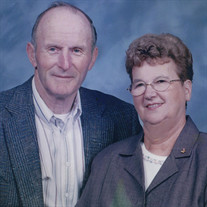 Robert R. Perry and Janet L. Perry, both passed away on Wednesday, January 1, 2020. Robert was born November 9, 1935 in Buel Twp., son of the late Russell and Elizabeth (Hendra) Perry. Janet was born August 7, 1934 in Buel Twp., daughter of the late Victor and Elda (Paton) VanCamp They were married on March 7, 1953 in the Buel United Methodist Church. They were lifelong residents of the Croswell area. Both Bob and Janet were active in the community with Croswell fair boards and Sanilac county fair boards. They were both members of the Croswell United Methodist Church for many years. Robert started as a farmer on the family farm and selling horses and horse trailers and then became an entrepreneur when he built and opened his first manufactured home community, Country Hill Pines in 1983, then a second community, Buel Hill Estates in 1992 where Janet and Ranae worked beside him in the office, and the twins, Brent and Bart worked outside. Janet was also a 4-H leader for many years. Janet worked at Croswell post office for several years. Bob and Janet loved horses and went on many trail rides up north with family and friends. Robert loved to work with his family in his communities and had a hand in everything when it came to being developed; they loved helping people whenever they could. They’re survived by 2 sons, Mark (Paula), and Bart (Theresa); daughter, Ranae; grandkids, Steven (Jessica), Shawn, Adam (Renee) Kapa, Trevor (Terese), Elysha Wiktorek, Troy, Anthony, Ryan (Ashley), Wyatt, Edwin, Ben (Molly) Anna, Robert, Levi, and Tia; and many great grandkids. Bob leaves three sisters, Jean (Rob) Loescher, of Croswell, Wanda (Ron) Bayes of Florida, and Betty (Dan) Stone, of Florida. Janet leaves two brothers Derald (Pat) VanCamp, of Mt. Clemens. and Rick (Donna) VanConant, of Wheaton IL. and a sister Gayla Eagle, of Sandusky; and daughters-in-law, Donna and Michelle. They were preceded in death by their 2 sons, Dennis and Brent. Funeral Services will be held 11 AM Tuesday, January 7 at the Croswell United Methodist Church. Rev. Linda Fuller will officiate. Burial will be in the Croswell Cemetery Friends may call from 12-6 PM Sunday, and 2-9 PM Monday at the Pomeroy Funeral Home, Croswell, and at church from 10-11 AM Tuesday Memorials can be made to the Croswell United Methodist Church.

The family of Robert and Janet Perry created this Life Tributes page to make it easy to share your memories.

Robert R. Perry and Janet L. Perry, both passed away on Wednesday,...

Send flowers to the Perry family.