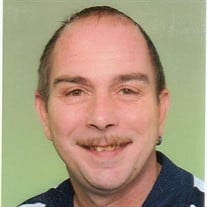 CROSWELL- Robert D. Bristle, age 53, a resident of Croswell died very unexpectedly on Monday, September 16, 2019 at his residence. He was born on August 27, 1966 in St. Clair a son of Eugene C. and Myrtle J. (Johnson) Bristle. Robert married Ramona A. Denk on October 8, 2005 in Ergersheim, Germany. Robert proudly served his country in the U. S. Army, serving in Operation Desert Storm, the Gulf War and Bosnia War. He was currently employed as a production machine operator with Huron Inc. in Lexington. Bob was a loving husband, father, son and brother and he will be sadly missed by his family and friends. . Bob is survived by his wife Ramona A. Bristle of Croswell, four sons, Nicklas of Germany, Justin, Jeramiah and Jerret all of Croswell; his mother, Myrtle J. Bristle of Port Huron; five sisters, Mary (Dwight) French, Schemida Marriott, Linda Bristle, Bonnie (Mike) Borowski and Ernestine (Jerry) MacDonald; mother in Law Sigrid Denk of Germany ; two brother in laws, Jurgen Denk and David Denk both of Germany; his best friend, Eddie Pincomb of Port Huron. Several nieces and nephews. He was preceded in death by his father, Eugene C. Bristle, his brother, Eugene C. Bristle, Jr. and his father in law, Friedrich Denk. Visitation will be from 11-1 P.M. on Friday, September, 27, 2019 at the Pomeroy Funeral Home in Croswell. Funeral services will be held at 1 P.M. that afternoon at the funeral home. The Croswell American Legion will provide the service and military rites. Memorials in memory of Bob may be made to the family.

The family of Robert D. Bristle created this Life Tributes page to make it easy to share your memories.

Send flowers to the Bristle family.