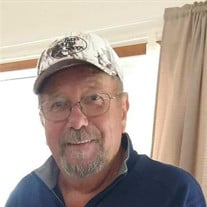 Robert “Bob” Clink, 70 of Lincoln, Michigan and formerly of Deckerville, Michigan passed away on January 28, 2019 at his winter home in Frostproof, Florida. He served for over 20 plus years in the United States Air Force which blessed him with the opportunity to see the “world” and traveled to the Philippines, Germany, Okinawa and other countries. He was always involved in his favorite past time of Harness Racing whether as an owner, trainer and driver. Harness Horses is a passion he shared with his father, children and many friends in that community all over the United States. He was the son of J.Hollis and Doris (Burgess) Clink who have both passed. He was the Dad of three children, Doris “De” Sullivan, Colleen Somers and Robert “Rob” Clink and father in law to Mo Sullivan, Paul Somers and Leslie Clink. He was Grandpa Bob to 10 grandchildren, Holly, Mathew and Spencer Winningham, Sawyer, Jordyn, Macy and Blake Somers and Delyiah, Robby and Grayson Clink. He was the brother of Eva Heronemus and brother in law to Larry Heronemus and Uncle to Kevin, Jeff and Kerrie (Green) Heronemus and well as cousin to many from his Clink and Burgess family members. He was a friend to all and with the fortune of being able to travel had friends all over the United States that he cherished and appreciated. Services will be at McGregor United Methodist Church at 2230 Forester Rd, Deckerville Michigan 48427. The viewing will start at 10:30 A.M. on Wednesday, February 6, 2019 , with a Memorial Service starting at 12Noon, food to follow in the fellowship hall. In the spring, Pomeroy Funeral Home in Carsonville, Michigan will complete the burial at Washington Township Cemetery in Carsonville, Michigan next to his parents and brother. In lieu of flowers, the family ask that a donation is made in his honor and name to the Alcona Sheriff Department at 214 W. Main Street, Harrisville MI 48740 and phone is 989-724-6271. We will always carry your memory in our hearts……….

Robert &#8220;Bob&#8221; Clink, 70 of Lincoln, Michigan and formerly of Deckerville, Michigan passed away on January 28, 2019 at his winter home in Frostproof, Florida. He served for over 20 plus years in the United States Air Force which blessed... View Obituary & Service Information

The family of Robert H. Clink created this Life Tributes page to make it easy to share your memories.

Robert “Bob” Clink, 70 of Lincoln, Michigan and formerly of Deckerville,...

Send flowers to the Clink family.