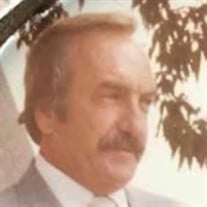 MELVIN AND DAYTONA BEACH SHORES-Robert (Bob) Richard Zglinski, age 92, of Daytona Beach Shores, Florida (formerly of Melvin, Michigan) passed away on February 8, 2021 at the Halifax Hospital. Robert, the youngest child of Polish immigrants was born on January 28, 1929 in Detroit, Michigan. He attended Detroit Public schools where he met and later married Joanne (Junie) Nancy Zimmek on August 5, 1950 at Sacred Heart Catholic Church in Roseville, Michigan. He was preceded in death by his beloved wife Joanne, whom he affectionately nicknamed Chick, daughter Randi Allison and granddaughter Christy Ruhl. He is survived by four daughters, 10 grandchildren, 7 great grandchildren, sister-in-law and many nieces and nephews. Bob was stationed in Germany while he served in the U.S. Army. Upon his return he took up the profession of truck driver, working for Central Transport and Dunn and Mavis before retiring in 1977. He loved to drive and enjoyed cross country road trips. He was an enthusiast of cars, motorcycles and boats in his early years. After retirement he loved working on his farm or completing his wife’s home improvement projects. Most of all he enjoyed socializing with old and new friends that he would meet at the VFW, Eagles Club or one of the local establishments. He was well liked for his colorful story telling, his effortless charm and quick wit. He especially liked being part of his Daytona Beach Shores community of friends who affectionately called him “Uncle Bob”. His poor vision did not stop him from getting out. He could frequently be seen riding his electric tricycle which he jokingly referred to as his “Hardly” Davidson around town, usually with a case of Miller Highlife in the basket. Bob lived his life his way and by his rules, which most likely led to his longevity and good spirits. He was loved by those who knew him. He will be greatly missed. A private memorial will be held in the summer. Na Zdrowie Bob.

The family of Robert Richard Zglinski created this Life Tributes page to make it easy to share your memories.

Send flowers to the Zglinski family.